Even a pair of bounty hunters can help save a whole planet!

Bounty hunters get a pretty bad wrap in the Star Wars films. They’re mainly seen working for the Empire and getting knocked into hungry holes by blinded smugglers. But, every now and then they actually fight for more than their bank balances as seen in a pair of 2002 one shots written by Ron Marz, STAR WARS: JANGO FETT and STAR WARS: ZAM WESELL.

The first part, as drawn by Tom Fowler, kicked off with Jango Fett seamlessly fulfilling a contract to kill Black Sun’s Vigo Antonin for Dreddon the Hutt. Upon returning to Dreddon’s domicile, he’s surprised to find the Hutt dead and the shape-shifting bounty hunter Zam Wesell lying in wait for him. As it turned out, she had been hired by Antonin to kill Dreddon, so they were both left with dead clients and no payout. Going their separate ways, Jango returned home to Kamino and his son Boba, but soon headed to Coruscant to meet with Fernooda, who worked for a collector wanting a stolen artifact from Seylott returned to him. 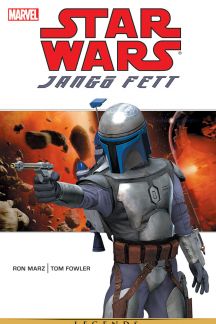 Jango then traveled to Seylott to track down the artifact where he explored ancient ruins and tangled with huge insectoid monsters. Upon finding a native with his quarry, Fett blasted him. The being then explained that the infant—the artifact—needed to be with its mother and also referred to it as the “destroyer of worlds” before dying. After walking away from the temple, Jango once again found himself held up by Zam, who snuck up behind him with blaster at the ready. As it happened, Fernooda hired her too and she accepted the gig for the same reason her rival did: to make up for their earlier jobs going south.

The duo spoke for a bit, but found themselves interrupted when another insect creature attacked. At first, Jango grabbed the artifact and ran, but thought better of it and returned to save his fellow bounty hunter. Zam left without the idol, claiming they were even until their next meeting.

That time would come in the ZAM WESELL one-shot by Marz and artist Ted Naifeh, which began with a Jedi Council meeting about General Ashaar Khorda, the Annoo-Dat radical who hired Fernooda to find people to get the artifact in the previous story. They discovered that he intended to use the weapon on one of three planets: Alderaan, Corellia, or Coruscant. The mission proved so sensitive, that only members from the council itself were sent to each planet to aid in its defense. Meanwhile, Zam traveled to Kamino to tell Jango that he helped Khorda get his hands on a weapon that, as she described, “causes a disturbance in the Force large enough to rip apart a world. Coruscant to be exact.” 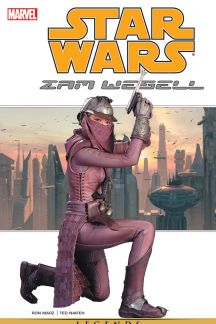 Though it took some convincing, Zam ultimately got Jango to see that they should go take care of this mistake themselves. On Coruscant, Khorda plotted with his faithful as Jedi Council Member Yarael Poof and the two bounty hunters independently looked for the villain. All of the parties collided at the best place to blow up a planet: its core. A battle ensued, but in the fray Khorda placed the artifact in the power core. Thanks to some unexpected teamwork from Poof, Jango, and Zam, they saved the city and returned the idol to Seylott.

Zam Wesell made her big screen debut in “Attack of the Clones.” In that film the Clawdite from Zolan worked with Jango Fett once again to kill Senator Amidala. First, she tried bombing the platform they landed on and later used poisonous snake-like creatures called kouhuns, but Obi-Wan Kenobi and Anakin Skywalker stopped her both times. They found her at a nearby bar and were just about to get Jango Fett’s name out of the bounty hunter when her so-called partner killed her from a distance.