John Ostrander and Jan Duursema give Jedi Master Shaak Ti time to shine in a 48 page one shot.

The Star Wars films do this great bit of filling the screen with fascinating characters. In doing so, they intrigue us, leaving us wanting more. That’s where many of the comics and animated series come into play, offering deeper looks at folks who only showed up on screen for moments at a time.

Jedi Master Shaak Ti’s a great example of this. She sat on the Jedi Council in “Attack of the Clones” and “Revenge of the Sith” and fought in the Battle of Geonisis. However, people wanted more of the Torguta warrior, which lead to the 2003 one-shot STAR WARS: JEDI – SHAAK TI by John Ostrander and Jan Duursema. 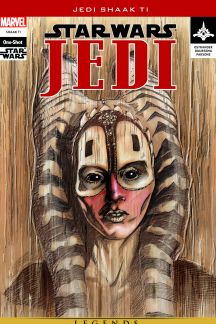 On the planet Brentall IV, Shaak Ti and other Jedis fought against Separatist commander Shogar Tok’s efforts to split from the Republic. Aided by Count Dooku, he and his people did an impressive job of holding back the Clone Trooper forces.

After consulting with fellow Jedi Plo Koon, Shaak Ti and a lone Trooper entered a nearby prison, looking to take control of it. In the process, they met inmate Saguro Autem, Padawan killer Lyshaa and a Wookie named Ryyk. Soon Ti sensed another presence in the jail that turned out to be Jedi Quinlan Vos!

Ti and Vos quickly developed a plan that would allow them the opportunity to take down Shogar Tok or disable their cannons, both if possible. With help from Autem, Lyshaa and Ryyk, they infiltrated his fortress, but ran into several opposing forces like the giant snake-like Scrange, laser filled Lighstorm Chambers and attempted betrayal.

Along the way, our title heroine exhibited amazing skills, not just as a Jedi warrior, but also as a compassionate person who mourned the dead and repeatedly offered forgiveness to one who could never truly understand such a thing.

In the end, Shaak Ti and her crew succeeded in both missions, destroying the cannons and removing Shogar Tok from the game board, but the victory rang hollow for the Jedi Master. After healing up in a Bacta tank back home, she met with Plo Koon and spoke to him about how she had questions about their efforts, but not enough time to actually contemplate them given the recurring battles.

Plo Koon offered no answers at the time, but instead offered himself as a meditation partner to his fellow member of the Council.

Though Quinlan Vos briefly appeared on Tatooine in “The Phantom Menace,” fans know him far more for his ongoing adventures in the “Star Wars: The Clone Wars” animated series. We saw how the Kiffar Jedi pushed the boundaries of his organization while also using his inborn abilities to track people by touching their left-behind things. He could retroactively read their thoughts and experiences this way, which made him very useful to the Republic’s various causes. As the show progressed, he went from taking on Aayla Secura as a Padawan to teaming up with former Sith trainee Asajj Ventress to take down Count Dooku. While that mission ultimately failed, the two did become lovers for a time.

Next time, we check back in with everyone’s favorite good-hearted rogue in CLASSIC STAR WARS: HAN SOLO AT STARS’ END by Brian Daley, Archie Goodwin and Alfredo Alcala.