John Jackson Miller returned to the character he wrote in KNIGHT ERRANT, this time joined by artists Ivan Rodriguez, Iban Coello and David Daza. Like its predecessor, the 2012 five issue limited series took place 1000 years in the past before Luke Skywalker came to power. In this era both Jedi and Sith counted many members in their respective fold.

In the case of Jedi Knight Kerra Holt, she made it her life’s mission to defend the forgotten people of the galaxy from the evil of the Sith. As the story kicked off, that mission lead her to a familiar place, her home planet Aquilaris and against a familiar foe, Sith Lord Daiman. 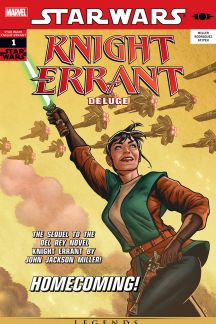 Upon arriving home, Holt found more than a few surprises waiting for her. First, Zodoh the Hutt attacked the Sith’s slave camp and, even worse, her people had become so addicted to a spice called Deluge that left them wanting nothing, including their own safety.

The Jedi decided to strike back against the Hutt’s forces on her own, but discovered some fellow fighters on her side: Captain Jenn Devaad, Grace Command and the volunteer Devil Squadron.

At the same time Zodoh threatened Sith Lord Odion and Arkadia Calimondra to give him his own piece of the pie in their area, or else the attacks would increase. Meanwhile, Kerra joined up with Devil Squadron. They intended to leave Aquilaris, but then Zodoh showed up with a flew of Stormdriver ships, intent on networking them to create enough rain to drown the entire world!

As the story unfolded, we learned the truth behind Devil Squadron and their true intentions as they visit various worlds, none of which sat well with Holt. After clearing up some grievances, Jenn and Kerra focused their efforts on their true enemies: the Sith Lords.

Consider this a major spoiler for DELUGE, but Devaad eventually admitted that the time-release boxes of supplies the Devil Squadron left behind on worlds didn’t hold food as originally stated, but instead the drug Deluge. Their plan revolved around leaving many, many samples behind in hopes that the Sith soldiers would take one hit and become hoplelessly addicted. They didn’t exactly care that regular people on the planets became addicts themselves because the people of that sector didn’t reach out to help Devaad and her people when they needed it the most. Eventually, she realized that all people can be lead towards hope and fought alongside Kerra Holt to strike an impressive blow against the Sith.