Zayne Carrick and his crew return to fight Mandalorians and save Jedi!

When last we left Zayne Carrick, he’d been framed for the deaths of his fellow Padawans by the Jedi who taught them all. He ran with local criminal Gryph and eventually met up with Camper and Jarael who flew them all off-planet in the Last Resort. Those adventures continued in STAR WARS: KNIGHTS OF THE OLD REPUBLIC #7–12 by writer John Jackson Miller and artists Brian Ching, Dustin Weaver, and others.

While stopped off on a mining colony called Vanquo in issue #7, they group used trickery to steal some parts, but soon found themselves down one member after Jarael, posing as a Jedi, fell to the overwhelming forces of attacking Mandalorians. To save their compatriot, the crew of the Last Resort, and their new captive, Mandalorian rebel Rohlan Dyre, made haste to Flashpoint, a science outpost for close to a sun run by Demagol. Something of a mad scientist, Demagol performed experiments to find out what made Jedis tick and to see if he could recreate the process in the Mandalorians.

With Dyre in the lead, the gang hit Flashpoint and used another batch of tricks to make the Mandalorians think the Republic had sabotaged the place before the armored clan took over. With the coast clear, they saved the other Jedi who had been captured, got Jarael back onboard and took off on another adventure. 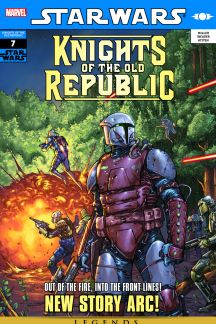 In the middle of this story, Miller and company shifted focus to Zayne’s former Master Lucien Fraay and the origins of his band of future-seeing Jedi who intended to kill all of Zayne’s fellow Padawans, including him. In doing so, we got a look at his childhood and just how he came to work with these other Jedi.

After the Flashpoint story wrapped with issue #10, the action shifted to a banking planet called Telerath, where Camper and Jarael tried to get some of Gryph’s funds freed up. In doing so, the Last Resort crew actually met up with Zayne’s dad and the pair of bumbling Ithorians hired by Lucien and the Jedi to keep an eye on Arvan Carrick in case Zayne showed up. The group not only schemed a way to free Zayne’s pops, but also get him and the rest of the family to the much safer location of Dantooine where Jedi Master Vandar Tokare promised to keep an eye on them.

These issues feature the Mandalorians pretty heavily, but who are they? We know the likes of Jango and Boba Fett wear the armor in the time of the films, but what about the larger group? Essentially, Mandalorians consist of warrior people from a variety of worlds who agree to live by a certain code. Members call their adopted home planet Mandalore and their supreme leader Mand’alor which can get a little confusing if you’re not familiar with either. Before the events of OLD REPUBLIC, the Mandalorians sided with the Sith in their war with the Jedi. At the time of the series, the Mandalorians seem intent on testing the existing forces lead by the Jedi Knights, but as Rohlan said, he’s not sure about their motives.

Next, Han Solo, Chewbacca, Lando Calrissian and a bevy of bounty hunters compete for scoundrel glory in STAR WARS UNDERWORLD by Mike Kennedy and Carlos Meglia.