Miller and Andrea Mutti show what happens with the Dark Lords of the Sith rule an entire planet!

When you hear about a world with a strong, very old Sith population that essentially took over upon arrival, you might think the place filled with blood and red face paint, but that’s not the case in John Jackson Miller and Andrea Mutti’s STAR WARS: LOST TRIBE OF THE SITH: SPIRAL. Instead you get a multi-faceted tale of legend meeting reality and embracing the potential for great good or evil!

This Legacy story took place during the time of the Old Republic, placing it 25,000 to 1,000 years before the Battle of Yavin. The planet Kesh played the setting of this story. Over two thousand years prior to the beginning of SPIRAL, the Sith ship Omen crashed on the planet, leaving Sith Lord Naga Sadow’s minions to create a new society for themselves, taking advantage of the fact that the Keshiri worshiped them. 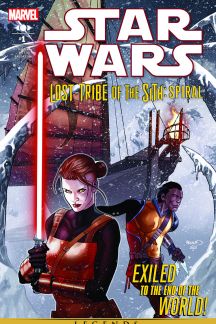 Back in the present of the story, the Keshiri celebrated the coming of the Sith. Well, not everyone. A rebel calling himself Death Spinner ran afoul of Officer Takara who had him arrested and sent to Grand Master Hilts.

We soon learned that, even though his family came to Kesh with the other Sith, they’d been cast out by the others and made to live with the locals who were themselves treated as slaves. Hilts wound up sending Spinner off on a ship to Alanciar. Takara – Hilts’ daughter – stowed away in a failed attempt at blazing her own trail that resulted in them both attempting a mutiny in a frigid wasteland! 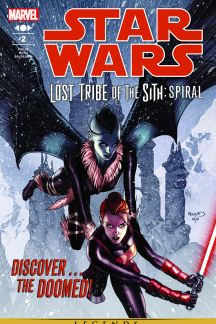 Those plans eventually lead them to meet another group from the stars known as The Doomed. This group derived from an earlier confrontation between Light and Dark Jedi who nearly destroyed Kesh, while also establishing the myths that the later Sith used to get the Keshiri to do their bidding.

The Doomed’s leader Kaliska explained all this to Spinner and Takara, but also mentioned an ancient Dark Jedi weapon that had been buried thousands of years before. As Takara agreed to learn from Kaliska and her people, Spinner made off with the secret weapon! When the weapon turned out to be Lord Dreypa, though, everyone involved knew that trouble would befall the entire planet, if not the galaxy. 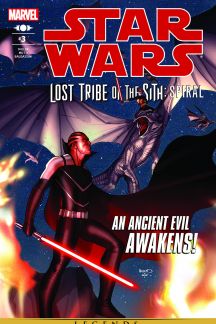 Spinner allied himself with Dreypa as a way to exact revenge against the very same power structure that cast his family out while Takara now feared for the establishment. The threat level jumped up several notches, though, when the well-slept Sith Lord remembered his original mission from 4000 years prior: to awaken Dark Side-Spawn Leviathans. 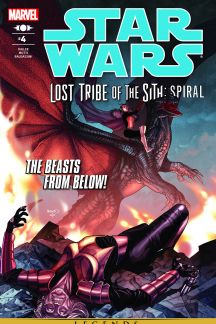 With the giants poised to run amok, destroying everything in their path and absorbing Force energy along the way, all of the groups joined forces to face the immediate and deadly threat. As his powers returned, he gained even more knowledge from those opposing him, including the secret fact that the Doomed hid a working Jedi starfighter under what became Takara’s home! 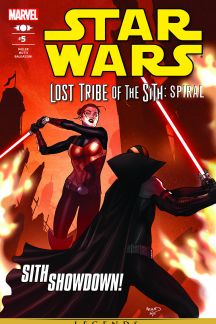 Instead of going herself to destroy the ship, though, Takara sent Spinner to handle the task, while also return her injured mother to her home. She remained on the battlefield to hold of Dreypa and his growing number of minions. Instead of blowing the vehicle up, though, Spinner used it to take out several of the Leviathans and then also trick Dreypa into exploding himself on a mountain!

In this story that’s already set pretty far back in the past, we also got to see even older lightsabers from 4,000 years before the events of SPIRAL. One major difference you might have noticed in the hardware – one that even Dreypa pointed out – is that the older versions used to have power packs worn on the wielder’s belt running directly to the weapon itself. As you can imagine, this made actually using the sword-like implement far more difficult, but laid the ground work for the elegant weapon first seen in “A New Hope!”

Next week we return to the classic Marvel STAR WARS series with issue #50!