Luke Skywalker returns to his roots!

For Luke Skywalker that old adage about not going home again proved true in the pages of STAR WARS #31–34 from the original series. Written by Archie Goodwin with Carmine Infantino pencils, this four issue arc kicked off with Luke returning to his native planet of Tatooine in an effort to recruit blockade-running pilots to help the Rebellion.

Instead he immediately spotted Imperial Troopers before returning to his old, burned-out house to find that his old friends Fixer and Camie had taken the Moisture Farm over for the House of Tagge. Regular readers will remember that Baron Tagge held fantasies of vengeance against both Luke and Darth Vader. He also planned a new destructive project called Omega Frost that could freeze even the deserts of Tatooine beneath those dual suns.

Luke and the droids decided to finally get on with their assignment and head to that beloved hive of scum and villainy also known as Mos Eisley where, go figure, they ran into Han Solo and Chewbacca, who themselves returned to the planet after in order to drop Jabba off after the last arc. Thanks to Fixer’s dropping the dime on Luke, the space-faring friends took off as Stormtroopers busted up their reunion. During the escape, their speeder took fire and eventually died out leaving them at the mercy of the Jawas who inadvertently discovered one of the Omega Frost devices. 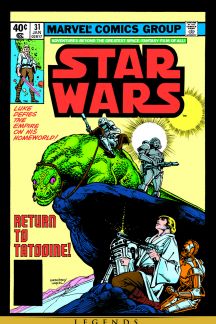 Before long, the group returned to the Millennium Falcon and took off for space in the pages of issue #33. Luke infiltrated an in-space exchange and overheard Baron Tagge’s plans for the Omega Frost weapon, which could spell certain doom for the Rebellion.

Captured, Luke battled Baron Tagge in a lightsaber duel that resulted in the youth destroying his opponent’s special glasses, but not actually hurting Tagge in the process, even given the darkened conditions. Luke quickly escaped in a TIE Fighter, but remained far from safe and sound.

Finally, in the last piece of the story, Luke jettisoned himself from the fighter as Han returned in the Millennium Falcon with Princess Leia to see the kind of trouble the Omega Frost could produce in open space. Alone with just a space suit, jetpack and his lightsaber, Luke attacked the Omega Frost-producing device and barely survived the ensuing explosion. Luckily for him, the Falcon flew nearby and Han picked him up!

In addition to bringing back characters like Fixer and Camie who originally appeared in the first draft of the “New Hope” script and also in the pages of STAR WARS #2, these issues also bring in another fun bit of Star Wars culture in the form of the Imperial Troop Carrier! Toy-minded fans will remember this as one of the vehicles released in 1979. You could pack a bunch of figures in this sound-enhanced vehicle. In addition to popping up on Tatooine in these issues, it also appeared several times in early episodes of “Star Wars Rebels,” a show that has gone to great lengths to mine the archives for all kinds of nods to the designs that went into making this franchise memorable.

Next week we check back in on DARTH VADER by Charles Soule and Salvador Larroca with issues #7-12!