What’s a Jedi to do when they get some time off after fighting in the Clone Wars for a year? Anakin Skywalker travelled to Naboo to hang out with his love Padme, but Obi-Wan went a different route, leading into STAR WARS: OBSESSION by Haden Blackman and Brian Ching.  Published between 2004 and 2005, the five issue series focused on Master Kenobi as he continued to search for Asajj Ventress even though Anakin firmly believed that he had killed the warrior.

Setting out on this crusade alone, Kenobi first traveled to Trigalis where he tore through Xist’s forces to get a clue about Ventress’ whereabouts leading him to a space yacht near Maramere. The Jedi Council could not spare any more help on Obi-Wan’s mission, so he decided to interrupt Anakin’s vacation and ask him for help. Begrudgingly, the new Jedi Knight agreed, and the duo made their way directly to a ship filled with dead people and a massive cyborg bounty hunter named Durge. Realizing Xist had set him up, Obi-Wan raced to get information from Durge’s ship while Anakin faced the hulking beast.

As the ship exploded around them, Anakin used his Jedi abilities first to get the upper hand on Durge, but also to throw him into an escape pod and aim it directly into a nearby sun. The Jedi nearly died themselves, but found salvation when The Intervention appeared filled with their brethren and Bail Organa to save them before carrying them on to Ventress’ supposed location on Boz Pity. 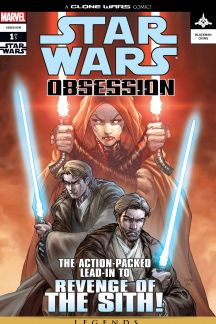 Thanks to some fancy—and nearly deadly—flying from Anakin, the Republic representatives got past the blockade around the planet with the Jedi landing on planet. There they found themselves facing both General Grievous and Count Dooku. While the others battled fiercely, Obi-Wan entered a lab and found that Ventress still lived!

Unleashed, Ventress immediately attacked Master Kenobi. He wanted to save her, but ultimately failed as she continued with her evil ways up until the point where Dooku and Grievous flew away, leaving her to deal with the Jedi, Clones and their impending victory. Still believing in her potential goodness, Obi-Wan told the soldiers to take her back to Coruscant to give her a proper burial. Later, on the medical ship, she woke up—having used Sith meditation techniques—and asked the pilots to “fly as far away as you can.”

Though Durge met his end in OBSESSION, he began life as a character on the “Star Wars: Clone Wars” animated series. The Gen’Dai bounty hunter with an affinity for armor and a hatred for Mandalorians lived for a few thousand years and eventually became a commander in Count Dooku’s Confederacy of Independent Systems, which further brought him into conflict with Obi-Wan and Anakin.

Next time, dig further into the world of the “Star Wars: Starfighter” video game with the CROSSBONES three issues series from 2002!