Ki-Adi-Mundi gets to the heart of a mystery involving a missing Jedi Knight!

Jedi Knight Ki-Adi-Mundi took center stage in the first arc of the 1998-launched STAR WARS series and then returned in issues #7–12 to seize the spotlight once again in a pre-Prequel tale thanks to writer Tim Truman along with artists Tom Raney, Rob Pereira, Rick Leonardi, and Al Rio. Called “Outlander,” the story kicked off on Tatooine at a trading depot called Mochot Steep with a Corellian couple named Conil and Camelle looking for weapons to protect their new home. There, Conil heard tell of a recent Tusken Raider attack on Anchorhead that revealed the usually clan-like race had worked together under one warleader. According to the Jawas nearby, the leader wasn’t a Sand Person himself, but instead an outworlder. Moments later the Raiders attacked Mochot Steep, leaving Conil dead, but sparing Camelle’s life. During the fray, the leader revealed that he wielded a red lightsaber.

After viewing footage of the attack on Coruscant, Ki-Adi-Mundi recognized that the lightsaber once belonged to the legendary Jedi Sharad Hett. Yoda posited that the warleader could actually be the long-thought-dead Hett returned in some way. The Council selected Ki-Adi-Mundi for the mission because he stood as the only member who never knew Sharad Hett and wouldn’t falter in taking care of him, if need be. With his mission in hand, the Jedi took off for the planet he had just visited and didn’t particularly like. As Yoda suggested, the Knight made a trip to Jabba the Hutt’s palace his first priority to ask for safe passage through the desert. Jabba agreed and offered help, but all that proved a trap that led to betrayal, a skiff battle, and a crash in the desert. 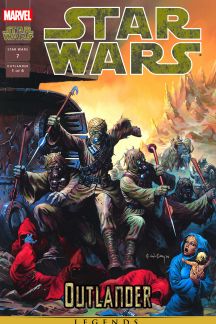 Before long both the Jedi and bounty hunter Aurra Sing headed towards The Needles, otherwise known as Tusken Raider headquarters. Ki arrived first to fight a Krayt Dragon while the warchief—who indeed revealed himself as Sharad Hett—looked on. The two made peace as Hett tried explaining why he appreciated the Tusken Raider lifestyle, which revolved around survival in a place constantly trying to kill them. Along the way, we also learned quite a bit more about Tatooine’s gaderffi aficionados.

Eventually the complicated truth revolving around warring Hutt factions and Jabba’s plans to goad the Tusken Raiders into becoming threatening so he could sell bad weapons came to the surface. A great battle commenced on Tatooine leaving one Jedi dead, one with a new Padawan and one with a lot of rage that eventually turned him to the dark side. Of course, that will be a story for another day…

Bounty hunter Aurra Sing spent a lot of this story explaining things from afar, narrating the tale and then swooping in to attack, and even kill, Jedi. But what’s her deal? She first appeared on screen in “The Phantom Menace” but only briefly. She would go on to recur regularly in “Star Wars: The Clone Wars,” taking a teenage Boba Fett under her wing and using his rage against the Jedi for her own advantage. Once a Jedi Padawan herself, Sing trained with Dark Woman until pirates kidnapped her and she eventually wound up with Anzati assassins who not only educated her in their ways, but also implanted a computer into her brain. Feeling abandoned by the Jedi, she took any job possible where one of them might end up in her crosshairs.

Next time, pick back up with Kerra in the pages of STAR WARS: KNIGHT ERRANT – DELUGE by John Jackson Miller, Ivan Rodriguez and Iban Coello!