As we’ve previously mentioned, STAR WARS: EMPIRE offered a variety of writers and artists the opportunity to work together and build up the world around the original three films in the Legends continuity. The first story revolved around Darth Vader dealing with traitors while the next three issues focused on Princess Leia and Boba Fett.

Landing on Ralltiir under the guise of diplomatic mission, Leia soon found a local band of Rebels trying to overthrow the Empire’s Lord Tion. And they had good reason considering Tion ordered the population “purified.” 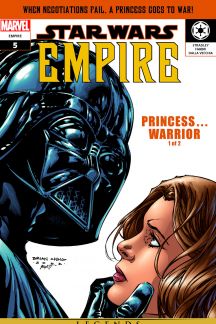 Before Leia even got inside, the locals began their own assault. This proved a distraction so one of their number, Basso, could convey information to Leia that he’d absorbed via Hypnotic Imprint. After stowing the man on her own speeder, Leia then proved her bravery further by standing up to Darth Vader himself!

Though they got off planet with Basso thanks to Leia’s clever manipulation of Tion and his all-hearing security system, the Princess still wanted to help the people of Ralltiir. She then traveled to the Kattada spaceport of Haleoda, a place known for it’s efficient and trustworthy smugglers. After talking to Haledoda’s elected leader Mia Ikova, they struck a deal to get supplies to the Rebels on Ralltiir.

Just as Leia planned on returning home to Alderaan, an Imperial ship landed and immediately placed everyone under arrest by order of Lord Vader. Though she intended to go along peacefully, Leia ordered her people to fire on the Imperials after they shot Mia and her guards.

As his people called for a retreat, Commander Karg stood with a blaster against Leia’s head and would have pulled the trigger had one of her people not blasted him with their ship’s turret. Showing her own incredibly mercy, Leia ordered that both Mia and Karg be taken aboard the ship to save their lives. 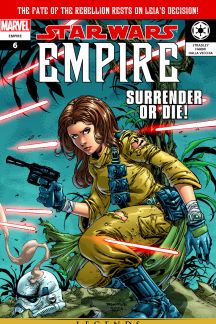 On the ship, Mia died gracefully, asking that her father honor the promise she made to help Leia smuggle the supplies to Ralltiir while Karg demanded attention and proved the kind of baseness that the Empire promoted.

Not long after, Basso came out of the bacta tank and Leia asked him for advice in how to handle the situations on Kattada where they’d stranded an Imperial squad on the ground. She struggled with the reality that these actions would most likely lead to bloodshed. Ultimately, she joined her forces along with those from Kattada to defeat their shared enemy.

While one of her men tried explaining to her that she made a better leader and figurehead than someone who should be rushing into battle, her side won the fight, though she’d remember the experience forever as it tempered her into the leader we saw on the big screen and beyond.

STAR WARS EMPIRE #7 by John Wagner and Cam Kennedy offered a one-off look at what Boba Fett’s life looked like after immediately after the events of “A New Hope.” The Empire fully embraced wiping out Rebel Scum wherever they saw it, even on remote outposts like Solem, where the bounty hunter chased all over the place trying to find the freedom fighter’s figurehead, Yolan Bren. As it turned out, his own brother put the call out of his head. He then tried to weasel out of paying Boba Fett which, any right-thinking sentient in the galaxy knows, does not go over well in the end. 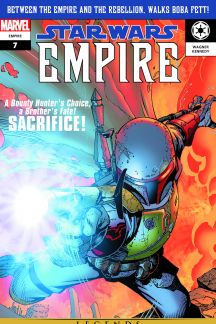