The master and padawan took center stage in this 2002 limited series.

We only got a relatively small glimpse of Qui-Gon Jinn’s relationship with his padawan Obi-Wan Kenobi on the big screen in 1999’s “Star Wars: Episode I – The Phantom Menace.” However, in the world of the Legends continuity, more adventures came to light featuring the important pair of interplanetary protectors, like the one chronicled in STAR WARS: QUI-GON & OBI-WAN – THE AURORIENT EXPRESS.

This 2002 two-issue limited series by Mike Kennedy and Lucas Marangon began with a conversation between master and padawan about the moral relationship between the intent of an action and the positive or negative results before they both jumped out of a ship. 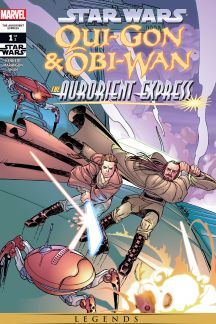 They soon landed nicely on the luxury cruise liner, The Aurorient Express, sailing through the atmosphere the gas planet Yorn Skot. The vessel no longer responded to communication attempts and sank further and further into the intense pressure of the atmosphere below. With no real protective force set up on the planet, our Jedi heroes literally leaped into action to save the day, but the mission would prove far more complicated than originally anticipated!

Immediately upon landing on the ship, Qui-Gon and Obi-Wan found themselves attacked by unexpected commercial-grade security droids. Our heroes avoided death, but made quite a scene as they finally entered the ship. Jumping right into their duties, our heroes met with the captain to try and discover the cause of the ship’s descent, not to mention the unexpected presence of those droids and a core bomb or two planted somewhere onboard!

The further they dug into the mystery, the more dirt they turned up in regards to both passengers on the ship and the people working on it. More surprisingly, they came to realize that more than one group worked to sabotage the ship for very different reasons. 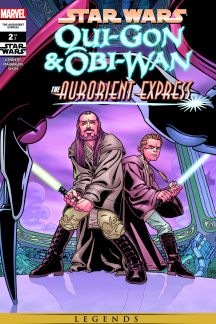 As we know, Obi-Wan would go on to work his way through that particular moral quandary along with many others both on screen and in the comics, but it’s interesting to see a younger version of the character getting his first taste of it out in the field.

FROM THE JEDI TEMPLE ARCHIVES

If the art seen in THE AURORIENT EXPRESS seems familiar, that because Lucas Marangon also drew the hilarious TAG & BINK Star Wars comics that have been previously covered here in Star Wars Spotlight. In addition to working on short stories in books like STAR WARS TALES, he’s also used his talents to color a variety of different books over the years and even draw covers and variants for titles like STAR WARS: GENERAL GRIEVOUS.