The Rebels took on the might of the Imperial weapon The Tarkin in the aftermath of Episode V.

The original Marvel STAR WARS series blazed more than a few new trails as it continued to wrack up higher and higher issue numbers. Between “A New Hope” and “Empire Strikes Back,” the series filled in plenty of gaps while also presenting many new adventures. After “Empire,” the various creators continued those efforts, but without the swagger of Han Solo.

With 1981’s STAR WARS #51 and #52, David Michelinie and Walt Simonson brought Leia, C-3PO, Luke, R2-D2 and Chewbacca all back together for one of the Rebellion’s most important missions: destroying The Tarkin.

A brave freedom fighter by the name of Captain Maraba Tev stole plans for the new planet-destroying weapon and paid for delivering them to his superiors with his very life. General Rieekan then recalled the familiar heroes who had been scattered to various corners of the cosmos in search of a new home base for the Rebels, having lost Hoth. 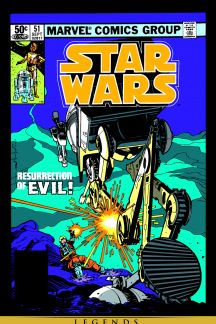 With the heroes of the rebellion reunited, they learned about this new weapon. The Empire had decided to take what they learned from the Death Star and make it unkillable. So, they took the ion cannon and surrounded it with engines and shields that would keep it safe from attack. Terrified at what this device – called The Tarkin – could do not just to the Rebellion, but all life in existence, they needed Leia, Luke, Chewie and the droids to infiltrate the Empire and make sure they never finished building this atrocity.

They then flew the Millennium Falcon to a planet called Hockaleg in the Patriim system where they quickly grabbed some uniforms from a group of workers and began their infiltration of the crews building The Tarkin. Thanks to Luke’s further master of Jedi tricks, he got them all aboard a ship that took them directly up to the in-construction destroyer.

Our heroes had no idea that Darth Vader oversaw construction and immediately sensed Luke’s presence as they unloaded along with a legion of other workers onto The Tarkin. Vader even made moves to trap the young man by removing the security detail from the main power reactors. However, another force moved against Vader in the form of a group of Imperial officers who wanted the masked man eliminated for leading so many of their comrades to their deaths!

As you might expect, everything came to a head in the second issue of this two-parter. The Rebels made their way through the facility as Vader awaited his confrontation with Luke and the Imperials planned their own trap. As Skywalker approached, the traitors opened an airlock to kick Vader out into space which also wrenched the grenade Luke carried from his hand. 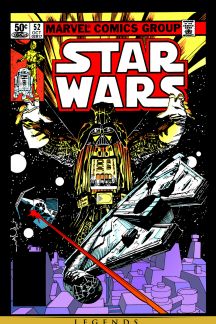 With their plan in peril, our heroes did a fair amount of scrambling and improvising, but they also had an unknown ace up their sleeves in the form of Lando Calrissian who had stowed away on the Falcon, which remained parked back down on Hockaleg. He took off in the Falcon just as the infiltrating group reunited and hopped on a transport of their own. With Lando keeping the TIE Fighters off their backs, they managed to escape.

After some fancy flying and even the presence of Lord Vader in his personal TIE Fighter, our heroes managed to fully escape after the Tarkin attempted to fire on them but instead self-destructed. Leia then explained that, after their initial plan went south, she reprogrammed the giant cannon to blow itself up upon first use!

As mentioned above, the Marvel series covered plenty of ground as it ran for over a hundred issues. The Tarkin marks an interesting foray into the thinking of the Empire. At this point only “New Hope” and “Empire” had been released, so no one knew that 1983’s “Return of the Jedi” would feature a second attempt at the Death Star. Once a weapon makes an impact, though, it tends to keep getting used and upgraded as we saw just a few years ago when “The Force Awakens” introduced us all to the First Order’s Starkiller Base! Maybe a more portable version like the Tarkin will show up before long on the big screen…

Next week we swing our X-Wings around to check back in with POE DAMERON!