Jix faces droid decoys aplenty and more on a mission for Darth Vader!

Gunnery Sergeant Wrenga Jixton, better known as Jix, had the impressive abilities to not only break into any place he wanted, but also unravel a complicated con, both of which played into STAR WARS: SHADOW STALKER. The Ryder Windham and Nick Choles one-shot from 1997 collected the story originally serialized in the “Star Wars Galaxy” magazine.

Regular Star Wars Spotlight readers will remember Jix from the SHADOWS OF THE EMPIRE comic as the agent sent by Vader to keep Luke Skywalker safe on Tatooine. To do so, he joined a Swoop Gang and put himself in grave danger to fulfill his mission. SHADOW STALKER, set between the events of “Empire Strikes Back” and the Shadows of the Empire multimedia event, began on Coruscant with a squad of Stormtroopers approaching Jix about a job. Unfortunately for them, they tried to flex their muscles, which didn’t sit well with the one-time Academy combat trainer.

Still, Jix used his skills to infiltrated Darth Vader’s inner sanctum, though the Sith Lord expected him. As the two conversed, they revealed a secret deal existing between them as well as some bad blood. After some posturing on both sides, Vader finally got to the point: He wanted Jix to kill Imperial Governor Torlock for planning to switch sides, but make it look like an assassination by the Rebels he secretly intended to join.

With that Jix flew off to Corulag on a drone barge and immediately started causing trouble in the name of the Rebellion. He even stopped a group of Black Sun operatives posing as Alliance faithful from killing Torlock in his speeder. After blasting his way into the vehicle, he found Torlock’s daughter Frija hiding inside behind a hologram of her dad. 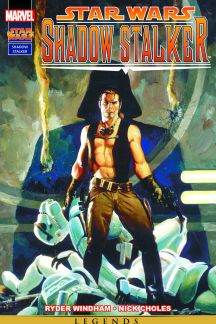 Later, Jix took off to check Admiral Droon’s place for traces of Torlock and found his target sitting in a jail cell—well, not technically, as he found himself face to face with a droid decoy. Droon then appeared and sent both man and machine down into a hole with a giant, fire-breathing, snake-like creature ready for a snack. Jix not only made short work of the dragon slug, but also figured out who had betrayed who thanks to some information from the Torlock droid. He then faced Droon and his accomplice—the real Frija—before reuniting the droid versions of the father and daughter and leaving for Coruscant to explain everything to Vader with the admiral along to answer for his crimes against the Empire.

Thanks to speeches from both Admiral Droon and Darth Vader, we learned quite a bit about Jix in this issue. As already mentioned, Corellian Wrenga Jixton made his way up to the rank of Gunnery Sergeant before an incident on Falleen that led not only to a court martial, but also imprisonment on Kessel. At some point, he escaped and wound up on a planet called Aridus. There, Vader found himself in some exploding towers and lost consciousness, but awoke on a ship piloted by Jix. The two struck a deal that boiled down to Jix working for Vader as long as the Empire promised to leave Aridus alone.

Next time, we return to the 1998-launched STAR WARS series for a story called “Outlander” by Tim Truman, Tom Raney, and Rick Leonardi.