Luke and Leia fight for their lives and try to escape the Empire!

Blowing up the Death Star at the end of “A New Hope” might have seemed like a final nail in the coffin to some viewers back when the film came out, but as we all saw in the ensuing sequels, the Rebellion still had its work cut out for it. In the wake of those heroic events, Luke and Leia continued their efforts to unify more people against the evils of the Empire as seen in adaptations like SPLINTER OF THE MIND’S EYE by Terry Austin and Chris Sprouse.

The story began with the siblings who didn’t yet know they were related flying to Circarpous IV, but having to land on the fifth planet in the system due to Leia’s ship being damaged. While trying to land, the pair find themselves hit by a strange energy that downs both ships. Eventually, the two heroes of the Rebellion—as well as R2-D2 and C-3PO—met up with one another and discovered the source of the unusual signals they’d received: An Imperial mining operation! To survive, Leia and Luke dressed as miners and infiltrated the colony.

From there, they came across an old woman named Halla who not only exhibited a connection to the Force, but also said she could get them off planet if they helped her get her hands on the power-amplifying Kaiburr crystal. Instead of getting right down to that business, our heroes found themselves tussling with some actual miners, which attracted the attention of Captain-Supervisor Grammel. He tossed them in jail and then ran their images up the Imperial flagpole which eventually garnered a visit from none other than Darth Vader himself. 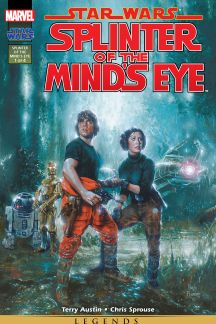 With the help of Halla, the droids and their Yuzzem cell mates, Leia and Luke escaped to go on an epic journey over and through the planet, meeting and battling strange creatures along the way. They even briefly encountered Vader before both of them took off on the many-day trip to the ancient temple holding the Kaiburr crystal. The good guys arrived first, but only by moments, leading to a brutal fight between father and son that lost the former one of his artificial arms and also sent him down into a deep, dark pit.

Realizing it would serve him better, Halla handed over the crystal to Luke after healing him and then he used it to save Leia from the slash across her belly that Vader gave with his lightsaber. Fixed up, they made their way to get off planet and on to their next adventure.

SPLINTER OF THE MIND’S EYE actually began life as a book in 1978 by Alan Dean Foster who had ghostwritten the novelization of “A New Hope.” The idea was for Foster to present a story that could be filmed with a relatively smaller budget than the first film, in case it didn’t succeed financially. Of course, that turned out to be an unnecessary precaution, but that still left the world with “Splinter of the Mind’s Eye” the novel, which has been retroactively dubbed the first piece of Expanded Universe storytelling!

When next we meet, we’ll venture into the first arc of the ongoing CLONE WARS series!