Pirate Nym returns to his home system to fight not just fellow sea criminal Sol Sixxa, but also the

Many think of Han Solo as an iconic swashbuckler in the Star Wars Universe, but he doesn’t hold a candle to STAR WARS: STARFIGHTER – CROSSBONES star Nym! Based on characters introduced in the 2001 video game “Star Wars: Starfighter,” this full-on three-issue pirate adventure from 2002 comes from the minds of writer Haden Blackman and artist Ramon Bachs.

The action began six years after the events of “The Phantom Menace” on the planet Maramere in the Karthakk system as a Neimoidian Trade Federation ship came under fire from a local pirate by the name of Sol Sixxa. After successfully sinking their ship and making off with some mysterious cargo, the ne’er-do-wells disappeared.

Fearing for the safety of her people as the Trade Federation set Sixxa and his pirates in their sites, Ambassador Loreli Ro of the Mere set out to find Nyx. At the time, the one-time hero of the Battle of Naboo fought in a clan war on Rodia that ended with plenty of dead Greedo lookalikes, but also more than a few double crosses.

Though initially uninterested in helping out the people of Maramere, Nym agreed after Loreli offered him the one thing he seemed to care about: money. Not long after Nym and his crew arrived on Maramere in his ship, Havoc, and immediately drew attention from both the Trade Federation and Sixxa’s people. To get some information on his prey, he went on a diving expedition to see what kind of weaponry they had, but ran into a sea monster called a Relix and lost a hand in the process. 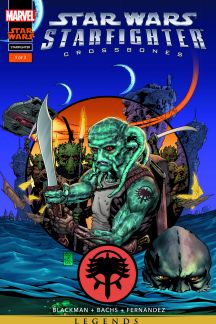 After escaping from the beast and finding a protocol droid’s head, Nym and company set sail for their battle with Sol Sixxa. Now outfitted with a small laser cannon to replace his missing hand, our hero led his people against his rival’s with bravery and cunning. The sea battle raged both above and below the waves, but it soon became clear what invention Sol Sixxa stole initially: a highly effective cloaking device.

The two groups of pirates ended up joining forces to fight the Trade Federation droid forces that showed up and Nym made a sneaky deal with Sixxa that helped solve the immediate problem, but also set up an alliance to stick it to their shared enemies even further!

As mentioned above, Nym and Vana Sage—who appeared in a few pages of the first issue of CROSSBONES—made their debut in the “Star Wars: Starfighter” video game from 2001. The game allowed players to take control of Nym, Vana, and another pilot named Rhys Dallows as they performed various missions defending the Senate from the Trade Federation forces and other threats. Between the game and CROSSBONES we know that Nym caused enough problems for the Trade Federation that they put a huge bounty on his head that eventually lead to his downfall. He quickly escaped, tried to save defend his base on Lok, but ultimately failed. Fueled by his hatred of the Federation, he joined the Royal Security Force and fought in the Battle of Naboo, defending the planet itself while the others attacked in space. After that, he refused official pardon from the Senate, a reward, and membership in the RSF to head back out on his own and get back to that pirate lifestyle.

Next week the Star Wars Spotlight spins back around to the original series from Marvel Comics!