The two funniest characters in the Star Wars universe make a comeback!

Five years after debuting in the excellent two-part TAG & BINK ARE DEAD, the title characters returned in a pair of issues titled STAR WARS: THE RETURN OF TAG & BINK SPECIAL EDITION and TAG & BINK EPISODE I: REVENGE OF THE CLONE MENACE that fall under the TAG & BINK II label on Marvel Unlimited. Along with the two leads, writer Kevin Rubio and artist Lucas Marangon also came back for the 2006 follow-ups.

As you can probably tell by the extended title, the first issue took a few swings at the “Special Edition” releases of the original Star Wars trilogy by inserting our “heroes” into the plot to save Han Solo from becoming a permanent focal point of the interior design for Jabba the Hutt’s palace. In fact, after botching the initial plan, Tag suited up as Boba Fett which explained why such a masterful bounty hunter and warrior fell so quickly into the Sarlacc pit. Don’t worry, he turned out okay. Or at least relatively so.

Not content to end their increasingly epic journey there, the pair eventually made their way to the second Death Star where they donned Imperial Guard gear and happened to be in the room when Darth Vader brought Luke Skywalker to Emperor Palpatine as seen in the climactic “Return of the Jedi” scene! As you might remember, that place blew up pretty well, so it’s safe to assume they didn’t make it out alive…unless this turns into a trilogy. 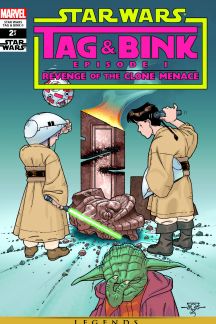 The final issue took the prequel route, introducing us to Tag and Bink as kids. Tag actually exhibited a great relationship with the Force which might explain why he showed up at so many important moments in galactic history. Bink? Not so much. As Jedi students, they got in the usual amount of trouble, like accidentally deleting an entire planet from the systems, which played a large part in the story of “Attack of the Clones,” and stowing away off planet, accidentally joining up with Anakin Skywalker and Padme Amidala along the way.

In a way, you can thank Tag and Bink for all the things you love about Star Wars because, as children, they helped the somewhat awkward Anakin woo Padme. Without that union, we wouldn’t have a couple of universe-saving twins running around sticking it to the Empire. You could even make an argument that by sparing their lives at the end of the issue, Anakin displayed the spark of goodness that would carry into his life as Darth Vader and come fully aflame when he encountered Luke all those years later.

In SPECIAL EDITION, there’s an extended joke revolving around a character named Manuel Both-Hanz. He’s the man with the plans about the second Death Star that Bink and Tag look for on Tatooine. After the duo met him, Boba Fett appeared to exact revenge, inadvertently blasting a hole right through Manny. This lead to the line in “Return of the Jedi” uttered by Mon Mothma, “Many Bothans died to bring us this information.” The amount of time it takes to get this gag directly correlates to how you pronounce that last name in your head. It took some of us…longer than we’d like to admit.

Next, we check back in on runaway Jedi wannabe Zayne Carrick in the pages of STAR WARS: KNIGHTS OF THE OLD REPUBLIC #7-12.