Luke's life was in the hands of Leia, Chewbacca and Lando in STAR WARS #50.

As the original Marvel STAR WARS series reached its mid-century mark in 1981, the book had covered a great deal of ground. It began by adapting the original 1977 film before moving into all original stories and sticking around long enough to tell the story of 1980’s “The Empire Strikes Back.”

With STAR WARS #50, the series had returned to covering all new ground. At this point, Luke Skywalker, Leia Organa, Chewbacca, R2-D2, C-3PO and Lando Calrissian carried on, with the safety of the kidnapped Han Solo never far from their minds.

In fact, #50 began with Lando and Chewie flying the Millennium Falcon in an effort to avoid the Empire and find their friend. Archie Goodwin, Al Williamson, Tom Palmer and Walt Simonson threw a wrench in that plan when the duo found themselves following Princess Leia back to the new Rebel base on Golrath.

Once there, we all learned the emergency that garnered Leia’s attention: The Crimson Forever. A mysterious disease had infected a group of Rebels including Luke! It all seemed to stem from a strange red gem that they discovered on a seemingly abandoned Imperial Star Destroyer.

Leia then admitted that she brought the Falcon back to this base because she needed to hear from Chewbacca. Han had told her about a job they pulled that sounded like it might be related to Luke’s current condition. Chewbacca then told the story himself with Threepio translating for him.

After joining up with the Rebellion, Han and Chewie did their best to avoid the Imps, landing on an out-of-the-way planet called Terminus. While trying to remember the location of “that cantina where those two swamp maidens danced,” they got blasted and woke up on Klysk’s ship. He intended to use our heroes and a group of other mercenaries to fly to the Red Nebula, out beyond the known galaxies. 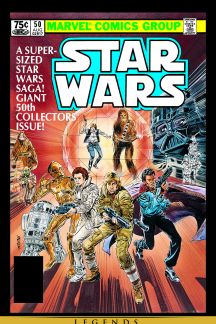 There Klysk wanted the mercenaries to steal a pair of red gems guarded by a local priest as well as a huge hairy beast that took a liking to Chewie! Han left his friend behind momentarily to carry the gems to Klysk and his crew. They refused to help get Solo’s second away from the beast and left them both there. After a series of double crosses and reveals, Han and Chewie left the planet with an understanding that the gems, when separated, could lead to chaos.

With one of the gems in hand, the Rebels realized they needed to track down the other. While traveling to the Red Nebula, they encountered another seemingly abandoned ship, this one controlled by Domina Tagge who had sworn vengeance on Luke Skywalker back in STAR WARS #37. She arranged the whole thing to spread disease, but things did not exactly go as planned.

Thanks to some quick thinking by Leia and Lando, our heroes traded Tagge’s salvation for her gem which, when combined with the other, reversed the effects of The Crimson Forever, saving Luke in the process.

With the immediate threat over, Leia sent Domina Tagge and her bounty hunters off in one ship and launching the red gems off into the Great Void.

Though they don’t wind up playing a huge role in this story, some pretty infamous bounty hunters appear in this story. We first saw IG-88 walking through the plague-filled empty ship that brought Lando and Leia to Domina Tagge. She’d hired the droid as well as Zuckuss, Dengar and 4-LOM to steal the gems from the Red Nebula, succeeding where Klysk failed. However, they didn’t plan on the gems releasing the Crimson Forever in their own ship, which lead to the deal with Leia. However, before they left, Lando mentioned to the bounty hunters that Domina might have a price on her head with the Empire. As it happened, this acted as her last appearance in the original Marvel series, so we can imagine what happened there!