Have you ever wondered how the various factions of the Rebel Alliance came together? Well, before “Rogue One” and “Star Wars Rebels” began to delve into that idea, the story was told in the Legacy continuity by  Haden Blackman, Brian Ching and David Ross in a video game-inspired graphic novel called STAR WARS: THE FORCE UNLEASHED.

Set between “Revenge of the Sith” and “A New Hope,” this book focuses on Starkiller, a Force-adept young man trained in secret by Darth Vader. The Sith Lord supposedly kept the apprentice’s existence a secret from Emperor Palpatine because he wanted to use the young man to actually kill Darth Sidious.

To do that, Vader trained Starkiller and then sent him out on a ship called The Rogue Shadow piloted by Captain Juno Eclipse and a droid called Proxy who could look like just about anyone in the galaxy.

Darth Vader sent Starkiller out to test himself against various surviving Jedi. First he traveled to Nar Shaadda to kill Jedi Master Rahm Kota. After Rahm relayed a vision that he would become the apprentice’s master in the future, Starkiller blinded him, stole his lightsaber and kicked him out into the void where he landed on a nearby cruiser. 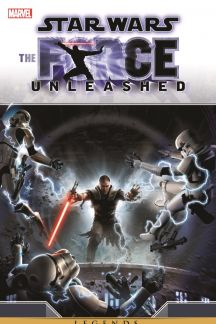 Upon returning to the man once known as Anakin, Starkiller lied and said he’d succeeded in killing Kora. Before moving on to their ultimate target, Palpatine, Vader sent Starkiller to Felucia to kill Jedi Council Member Shaak Ti. Of course, they had no idea that Ti had been training her own Padawan, Maris Brood. That confrontation ended with more Jedi prophecies, but Shaak falling into a nearby Sarlaac pit.

Starkiller returned victorious, but had been followed by the Emperor’s spies. With Palpatine in the know about the supposedly secret apprentice, he demanded that Vader kill the young man. After being impaled by a lightsaber and tossed out into space, though, a probe droid grabbed Starkiller after Vader commanded it to do so.

Six months later, Starkiller woke up on Vader’s ship, but Proxy set the whole vessel to blow in order to cover the young man’s continued existence on Vader’s orders. While making a break for it, Starkiller freed Eclipse and they all hopped aboard The Rogue Shadow to recruit some of the Emperor’s greatest enemies to take him out.

Starkiller then brought Rahm Kota into the fold before getting Princess Leia Organa off of Kashyyyk and then saving her father, Bail Organa, from the Sith-influenced Maris Brood on Felucia. Starkiller help Bail bring together the likes of Mon Mothma and Garm Bel Iblis who would become the the very heart of the Rebel Alliance.

And then Darth Vader showed up! It turned out that Vader had no intentions of killing the Emperor, but instead wanted Starkiller to round up all of his enemies in one place so they could be publicly killed, destroying hopes of a rebellion across the cosmos.

That would have worked if Vader had made sure he actually murdered Starkiller, though. Instead, The Rogue Shadow flew off to the in-contruction Death Star where he not only freed the nascent Alliance, but nearly killed Palpatine, seemingly dying in the process so that the very idea of freedom from tyranny could live on in the Rebel Alliance!

If you’re wondering how Master Rahm Kota survived Order 66, which made any and all Clone Troopers murder nearby Jedi, we’ve got an answer for you. As it happened, Kota didn’t believe that Clones were worthy to serve alongside him, so he established his own militia. Since he didn’t actually have and Clones nearby when Order 66 went out, there wasn’t anyone on hand to blast him in the back unceremoniously.

Next week, we return to the original Marvel STAR WARS series with #53 and 54, a pair of stories from legends Chris Claremont, Walt Simonson and Carmine Infantino.