Star Wars Spotlight: The Golden Age of the Sith

See how the feud between the Sith and the Republic started 5000 years before Luke Skywalker's birth!

Some battles go on so long that no one really knows how they start. That statement could easily be said about the wars between the Sith and the Republic, however, with STAR WARS: TALES OF THE JEDI – GOLDEN AGE OF THE SITH, readers got a look at how a pair of hyperspace jockeys accidentally lead the Republic into direct conflict with the supposedly lost Sith Lords.

Written by Kevin J. Anderson with art by Chris Gossett and Dario Carrasco, Jr. this story took place 5,000 years before the events of “A New Hope” in the Legends continuity. The story began in a zero issue that mixed Sith history in with the adventure of Jedi Odan-Urr, whose teacher Master Ooroo tasked him with assisting Empress Teta in her mission to unify the seven planets of the Horos System. Though admittedly more of a scholar than a warrior, Teta’s Jedi adviser Memit Nadill welcomed Odan-Urr and his different point of view. 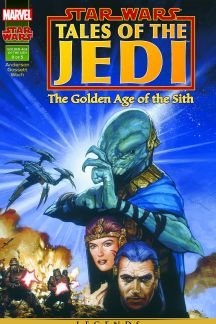 The unification plan found six of the seven planets coming together, but not Kirrek and its rebel forces, mostly pirates. Odan-Urr’s historical knowledge came into play almost immediately as he used Jedi Battle Meditation to increase his side’s hope as well as the other side’s fear to win the battle with less bloodshed. 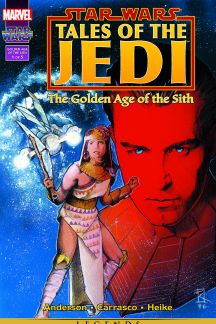 The majority of the story took place after The Unification Wars and focused on brother and sister hyperspace explorers Gav and Jori Daragon who stole their own ship from repair impresario Aarrba the Hutt and took off on a random course in hopes of discovering a hyperspace lane that could earn them some money if it proved usable.

That hasty and somewhat foolhardy decision from the Force-sensitive siblings lead them to one of the most dangerous places in all the galaxy, Korriban, a rocky planet with canyons and catacombs used by the Sith to bury their dead. The timing could not have been worse for the siblings as they arrived near the planet during the burial of Sith Lord Marka Ragnos. The event played stage for the growing drama between the more traditional Ludo Kressh and the more progressive Naga Sadow who had very different thoughts on how the Sith Empire should proceed into the future. 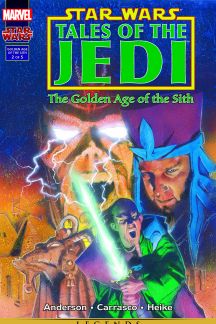 Their battle came to an end when Marka appeared as a Force Ghost and recounted the history of the Sith to them (see below). Ragnos added that the modern day Sith now found themselves living in a Golden Age, but that they teetered on the edge of great change. 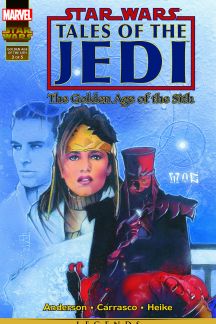 Back on Koros, Jedi Odan-Urr saw all this in a dream which lead him to tell Empress Teta and fellow Jedi Memit Nadill. Back on Korriban, the Sith lords captured Gav and Jori immediately after they landed, taking them back to the central planet in the Sith Empire, Ziost. There, Sadow manipulated those around him to see the Daragons as potential spies and put events into motion for his brethren to see the growing Republic as a dangerous enemy. To that end, he himself lead a group of loyal soldiers to break the twins out and pin the whole thing on the Republic. 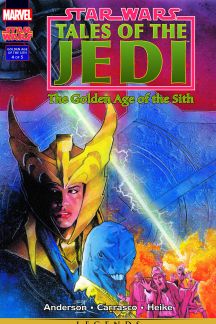 Sadow’s plan worked beautifully. He even managed to get the other members of the Sith council to elect him the new Dark Lord, though the appointment lead to Ludo Kressh leaving the group altogether. Meanwhile, Empress Teta and her Jedi companions traveled to Coruscant where the Empress conveyed Odan-Urr’s vision about the returning Lords of the Sith to the council members who did not take the information seriously.

At that same time, Sadow still had the twins captive, but separated them. He encouraged Gav to practice some Sith magic. Naga also instructed some of his loyal warriors to sneak back into Ziosk and steal the Daragon’s ship, once again framing the Republic. However, this time one of Sadow’s emblems remained behind, leading Ludo Kressh to doubt about the true perpetrators. 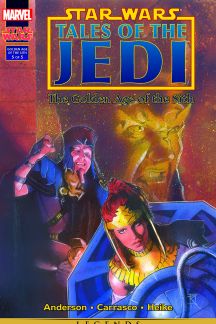 Just as Sadow presented Jori with their ship, Kressh moved his own forces against his longtime enemy’s. Undr siege, Naga Sadow told Jori to make her escape in their ship without Gav and head back to the Republic. At that point, Naga revealed the true might of not just his own ships, but also his spies in Kressh’s various ships. With the tables firmly turned, Kressh retreated and Naga Sadow began preparations to use the secretly hidden homing device on Jori’s ship to guide the Sith Empire directly into confrontation with the Republic!

After a split in the Jedi Order between the Light and Dark sides, the latter group took off in search of a new home and landed on a planet populated by the Sith, a group that treated these newly arrived Jedi as deities. When the Dark Jedi first encountered them, the race seemed to split into three clear-cut groups – servile slaves, learned engineers and the Massassi warriors. Over the years, some Dark Jedi interbred with the Sith leading to “watered down” bloodlines, like the one Ludo Kressh came from. The Dark Lords used the Sith to build forces that would go on to give the Republic trouble for thousands of years.