Back in 1981, three undisputed comic book legends came together to tell another story showcasing Princess Leia Organa’s absolute awesomeness. Published in the the original STAR WARS series from Marvel, this Legends story from STAR WARS #53 and #54 features the immense talents of Chris Claremont, Walt Simonson and Carmine Infantino.

The story began with Leia thinking of all she lost when the Empire ordered the destruction of her beloved home Alderaan, but that trip down memory lane came to an end when duty called. The Blockade Runner she traveled in reached a planet called Shiva that had garnered Imperial interest. She and Captain Chedaki planned to take a shuttle to figure out why, but when the Runner hit space mines, the plan got scuttled.

The shuttle itself caught on fire, so to save everyone else – Chedaki perished in the initial explosion – she flew the craft out of the larger Rebel vessel and crash landed on Shiva itself. There she survived on her own for a few days before running into Aron Preacebringer and his band of warriors including Keran and Delois. This group found themselves locked in a war with the Outcasts in a battle mostly fought with swords and blasters. 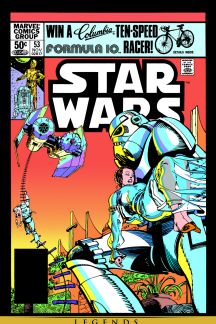 At first, Leia and Aron did not understand one another because of the language barrier and the Translatacomp did not recognize the speech at all. After fending off the Outcasts, the group returned to Aron’s throne city where he reunited with his wife Alisande. While there, Aron tried to figure out who had bombed one of the nearby cities and Leia acclimated to life on Shiva as best she could, though the growing feelings between Peacebringer and herself threatened to complicate her stay.

Conflicted about being rescued by the Rebels – part of her liked the sound of living a far more simple life on this out-of-the-way planet – Leia soon found herself in the middle of a much bigger problem as Imperial Blackguards came out of nowhere and subdued both her and Aron before taking them to their boss, Imperial Strike Force General Sk’Ar.

Once in the villain’s clutches, Aron learned that his compatriot Delois had betrayed them. He sold them out to the Empire and would become the planet’s leader after the Imperials took over. After learning how Sk’Ar intended to take Shiva over, Aron and Leia broke free of their captors and escaped into a ship that they used to catch up with a bomber. They dismantled the bomb aboard the craft, but received some unexpected help from Luke Skyalker who seemingly appeared out of nowhere to stop Delios from getting the drop on Leia. 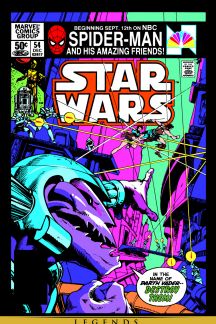 With most of the villains wrapped up by the combined might of Aron’s men and the Millennium Falcon’s usual crew, Sk’Ar attempted to make an escape that Chewbacca stopped by throwing a solid steel gun mount so hard at the craft that it exploded!

The elaborate celebration afterwards came to an abrupt end for the Falcon-fliers when word of a Star Destroyer in orbit called them to action. Luke took the controls from Lando and worked some fancy flying as he took the ship close enough to a black hole, but darted away after the Destroyer got stuck in its pull.

After all of this death and destruction, Leia showed why she was a formidable Rebel leader. She not only mourned the loss of her homeworld, but also all of the sentient lives who came to an end on that Star Destroyer and in the war in general. Luke even offered to drop her back off on Shiva and say that the rescue mission came up empty handed. Leia persevered, though, saying “I am Princess of Alderaan, Luke. Fate has cast me as a leader of the Rebellion. For better or worse, whatever the outcome…I’ll play that role to the finish.”

If some of the characters in this story, like Aron Peacebringer seem somewhat familiar, that’s because they began life as pages for the JOHN CARTER WARLORD OF MARS series that Marvel produced between 1977 and 1979. Carmine Infantino drew several pages that wound up not getting published because the series came to an end. Chris Claremont and Walt Simonson then came in to take the existing material, tweak it a bit and come up with a Star Wars story turned out to be a fantastic spotlight on Princess Leia!