Last night, fans got their first look at the trailer for “Star Wars: The Last Jedi.” However, as readers of the original Marvel STAR WARS series will remember, it’s not the first time that particular title’s been used in a story from a galaxy far, far away. Back in 1981, writer Mike W. Barr and artist Walt Simonson presented a tale by that same name in STAR WARS #49. The adventure kicked off with Luke, Leia, R2-D2, and C-3PO heading to a remote planet following a beacon in hopes of finding a person who could help them “turn an entire solar system against the Empire,” as young Skywalker put it on the opening page.

Having landed and jumped out for a look around, Luke soon realized that the beasts on the planet couldn’t be harmed in the traditional manner. Luckily Prince Denid appeared with his anti-magnetic polarization ray to zap them away. The Rebels then met Denid’s friend and companion Jedidiah, an alien creature who had once been asked to become a Jedi, but declined to help the prince and his bride leave their home planet of Velmor. In the process of getting supplies, he got hit in the head with a piece of debris that left him forgetting much, but still remembering his near-path as a Jedi.

After hearing the story of Denid and the creature known as Jedi, Luke blows up the prince’s old ship and they all hop on the Y-Wing to return Denid to Velmor. They all arrived on the planet just in time to stop the coronation of his brother Anod as king. Luke and Leia went with disguises on planet to avoid Imperial eyes, he as the bounty hunter Korl Marcus and she as Denid’s beloved Loren. Our heroes then met the Imperial attaché Captain Traal. Once his identity stood revealed and confirmed, most of the planet celebrated Denid’s return, but not all. 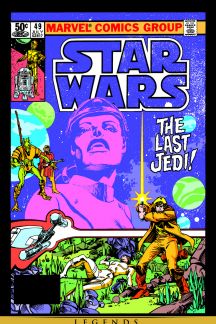 Traal pulled Luke aside and told him she knew that Korl Marcus did not exist and then said she’d let it slide if he’d kill Denid and Leia for her! He agreed and left, allowing Traal and Anod to explain that they suspected Denid would reject the Empire’s ways and align with the Rebellion. As it turned out, the regent Zelor also had his own schemes in the works, namely removing all other pieces from the game board, so he could continue ruling Velmor himself.

During the next day’s festivities, both sides turned on each other, with allegiances flipping and true motives revealed. Luckily for the further successes of the Rebellion, Jedidiah rode in and took out Traal before she could shoot Luke in the back. Their victory assured that the entire system would side with the Rebellion.

Upon leaving Velmor, Luke paid proper tribute to the creature known as Jedi, calling him the last Jedi and firing up his lightsaber in the cold vacuum of space.

Now, of course, we know that Jedidiah was not the final Jedi in the line. In the Legacy continuity, Luke would go on to reform the order and expand it to its old glory. Meanwhile, in the current continuity seen in the films and on shows like “Star Wars Rebels,” we know that other Jedi survived Order 66 and went on to continue using the Force for good. On December 15, we’ll find out what happens when Rey finally meets up with Luke Skywalker and what they plan to do about the menace of the First Order…

In the wake of Vader Down, the former Anakin Skywalker finds himself embroiled in the Shu-Torun War!