Wedge Antilles and his Rogue Squadron face the Empire!

Each week, Star Wars Spotlight combs through the digital archives of Marvel Unlimited to showcase one classic story from that distant galaxy filled with Jedi, Sith, princesses, scoundrels, and droids. 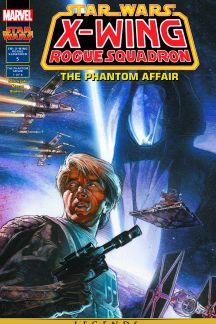 Issues #5–8, by Michael A. Stackpole, Darko Macan, Edvin Biukovic, and Gary Erskine, saw Wedge and his crew land on the planet Mrlsst to communicate with the local populace about obtaining a special transport called the Phantom Ship. The vessel—which was also sought after by the evil Galactic Empire—featured a unique cloaking device as well as gravity well resistant technology.

After Wedge ran into an old friend named Mirax, Tycho got into a fight with a subversive group called the Ante-Endor Association, whose goal was to convince people that the Rebellion was merely a propaganda organization. When the group attacked Tycho in a back alley, the pilot managed to hold his own, but was relieved to see the mysterious Ghost Jedi appear at his side and scare off the assailants. 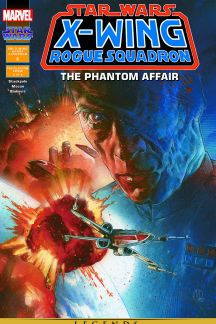 Wedge then ran into an enemy from his past—a notorious pirate-turned-Imperial officer called Loka Hask. Hask, also on the planet to negotiate for the Phantom Ship, was as surprised as Antilles, however, when a gang of masked raiders broke into a locked laboratory and stole the ship’s vital datacards. Tycho was falsely implicated in the crime and Wedge got thrown in jail for his association.

Soon, the Rogue group learned the truth that Wedge knew all along: the Phantom Ship was a hoax. His mission all along was not to buy the Phantom, but to drive the price up for the Empire in an effort to deplete their resources. Meanwhile, the Ghost Jedi—which turned out to be a hologram—freed Wedge from jail, allowing the pilot to meet back up with the rest of the Squadron and take down Hask’s Dreadnaught ship. 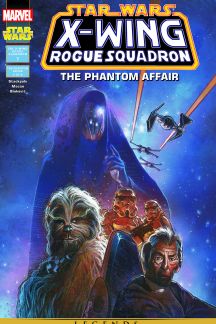 Featured in a flashback during this story arc, Wedge Antilles witnessed the deaths of his parents thanks to the carelessness of Loka Hask. In retaliation, the young pilot borrowed an X-Wing and took down Hask’s ship. The villain managed to survive, but became the host of a space parasite, which would mark his grotesque face for the rest of his life. 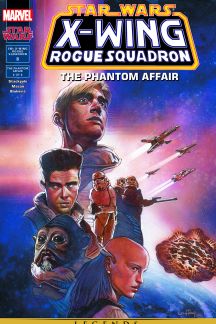 Next week, read about Starkiller, the son of two Jedi secretly trained by Darth Vader, in STAR WARS: THE FORCE UNLEASHED!