Though Darth Vader walked away relatively unscathed from the STAR WARS – DARTH VADER crossover called VADER DOWN, he still had plenty to deal with between a war on the mining planet of Shu-Torun and forces within the Empire secretly working against him.

That story ran from DARTH VADER ANNUAL #1 into DARTH VADER #16–19 by Kieron Gillen, Leinil Yu and Salvador Larroca. The first installment saw Vader traveling to the planet in an effort to remind the ore-barons and their leaders that the Empire remained in charge. During the visit, Rebel supporters attacked and the king’s third daughter Trios did her best to lead Vader to his death. However, the Sith Lord saw something useful in her and put her in charge of the planet after everyone’s favorite murder droids 0-0-0 and BT-1 killed the rest of the royal court. 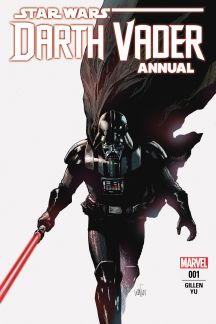 The main series issues picked up a bit later as the Ore Barons continued to lean towards rebellion even as Queen Trios tried steering them in the right direction. With the potential threat of losing one of their main sources of raw materials, the Emperor sent Vader to quell the uprising, assisted by Cylo and his two pseudo-cyber Jedi wannabes Morit and Aiolin.

On Shu-Torun, Vader found a queen who, while still relatively new to the throne, had grown into the role quite well. She fought fiercely as her enemies used important and even sacred equipment like Delving Citadels and Laval Leviathans against them. With the fearless agent of the Empire by her side, though, it seemed like the Ore Barons didn’t stand a chance. 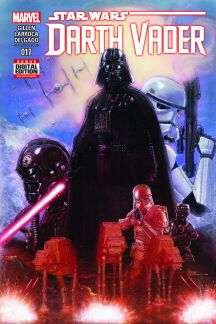 At least not a fair one. Which brings us back to Cylo who made a deal with the Ore Barons to sabotage Vader’s vessel in an attempt to destroy his rival while still remaining somewhat loyal to the Emperor. Darth Vader figured out the plot and, thanks in part to some impressive psychological warfare implemented by Triple-Zero, their opponents surrendered. 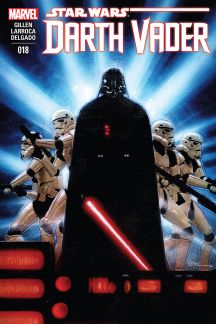 Meanwhile, Queen Trios took control of her own command, killed a traitor in her midst and continued on in her mission to unseat one of her major opponents. Upon finding him, she had the man killed and put his own daughter in charge saying, “I’ve found inexperienced youths not expecting power the most easy to manipulate,” to which Vader agreed. 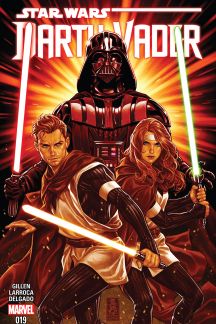 This story featured an interesting array of relationships in Darth Vader’s life at this time. On one side, you’ve got the stern, yet still somewhat helpful and encouraging mentorship between Vader and Queen Trios. On the other hand, he expressly tells Aiolin that he has nothing to teach her, mostly because of her status as a cyborg created by Cylo to appear Jedi-like. Later on, though, when she and her brother attack him, he does move to end her suffering in molten lava, though it appeared only to get one last bit of information out of her. Still, if anyone knows the pain of searing flesh, it’s the former Anakin Skywalker.

Finally, this run also featured Vader’s attempts to reclaim his one time covert op – and the creator of Triple-Zero and BeeTee – Doctor Aphra. She got captured at the end of VADER DOWN and, as we saw in the Rebel Jail story in STAR WARS, she helped Princess Leia stop an unorthodox prison break that essentially won her her freedom. The Sith Lord put out an anonymous call to bounty hunters to find her. When Beebox came back with a pile of bones, Vader knew it wasn’t Aphra and killed the liar. At the end of the story, Inspector Thanoth claimed to have found her and wanted to talk to Lord Vader about her. For more on that, you’ll just have to wait until we return to this series down the road!

Next week we travel back to the Clone Wars as John Ostrander, Jan Duursema and Dan Parsons showcase a hero in STAR WARS JEDI – SHAAK TI!