Han Solo, Chewbacca, Lando, and a slew of familiar bounty hunters all clamor for the same treasure!

We’ve all had those nights where we’re sitting around with our friends and a wager makes its way into THE conversation. When that happens to normal people, the results can range from the loss of some cash to an embarrassing payout. When a trio of Hutts make a bet, the lives of smugglers, treasure hunters, and bounty hunters wind up on the chopping block!

That’s the plot behind STAR WARS: UNDERWORLD, the five-issue series lasting from 2000 to 2001 from Mike Kennedy and Carlos Meglia that takes place shortly before “A New Hope.” After a fair amount of blubber busting all around, Jabba, Embra, and Malta the Hutts made a wager revolving around the requisition of an artifact called the Yavin Vassilika. Each of them could choose three agents to track the object down and return it to their respective Hutt. 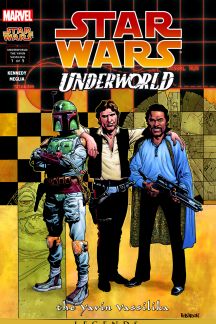 This resulted in Han Solo, Chewbacca, and Lando Calrissian joining forces against Dengar, Bossk, and IG-88 on one side and 4-LOM, Zuckus, and Sardu Sallowe on the other. Malta’s assistant Jozzel, Greedo, and Boba Fett also wind up in the mix. As you might expect given the less-than-reputable cast of characters involved in this complicated caper, they spent just about as much time trying to blast each other out of existence as they did looking for the Vassilika. And when not looking to kill one another, they tried figuring out the perfect and most profitable way to double cross the other competitors.

Jozzel seemed to be playing the most angles though. In addition to representing Malta to Dengar, Bossk, and IG-88, she wound up running around with Han, Lando, and Chewie in the Falcon all while dealing with a mysterious other party dubbed The Collector. When she finally met up with her secret ally, it turned out to be a faction of the Rebellion including Han Solo’s former flame Bria Tharen. They didn’t want the Vassilika for its outward beauty, though, but instead the key to the Yavin IV moon that played such an important part in “A New Hope!”

Bria Tharen appeared in the final issue of this series; as you can tell by Han and Lando’s reactions, there’s a history there. Throughout UNDERWORLD, both Han and Lando discuss their earlier interactions with women involved with Rebel dealings and how poorly that went for Mr. Solo in the past. Tharen made her debut in the first book of the Han Solo novel trilogy written by A.C. Crispin called “The Paradise Snare.” Their relationship continued through the second installment, “The Hutt Gambit,” and into the final, “Rebel Dawn,” in which the character perished during an operation that explained how the Alliance got their hands on the Death Star plans in the Legends continuity.

Next time, fly back to the original STAR WARS series with issue #31 as Luke Skywalker returns to Tatooine!