Can the Rebellion take out a stranded Sith Lord?

In previous installments of Star Wars Spotlight, we covered the second arcs of both STAR WARS and DARTH VADER. You’ll remember that, in the former book, Luke tracked down Obi-Wan Kenobi’s diary on Tatooine and used it to find out more about his father while in the latter, that same father discovered that Skywalker blew up the Death Star. Those two stories finally came to a head in the 2015 crossover Vader Down. The story starts with STAR WARS: VADER DOWN #1 before moving into DARTH VADER #13–15 and STAR WARS #13–14 by Jason Aaron, Kieron Gillen, Mike Deodato, and Salvador Larroca.

The festivities began as Vader traveled to the Jedi temple on Vrogas Vas where his secret associate Doctor Aphra told him that Skywalker would be. When the Sith Lord arrived in orbit, he found himself facing three squadrons of X-wings that just so happened to be out for maneuvers at the time. Of course, Vader thought Aphra double crossed him, but that didn’t stop him from taking care of most of the ships himself. Once Luke joined the fray and smashed his X-wing into Vader’s TIE, sending them tumbling towards the planet, the battle ended.

Trying to take advantage of Vader being apparently stranded on Vrogas Vas, the Rebellion not only rallied anyone stationed from their refueling station on-planet, but also an entire battalion to the scene, including Princess Leia who hitched a ride on the Millennium Falcon with the usual suspects: C-3PO, Chewbacca, and Han Solo. Vader proved that even all those reinforcements would not do the trick as he activated the grenades worn by the hundred or so soldiers surrounding him—and that’s before he took out a tank with his lightsaber. 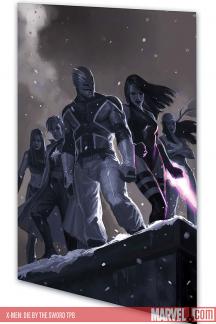 Not long after, the Falcon landed on Vrogas Vas with Dr. Aphra and her murder droids not far behind. To get back on her boss’ good side, she paints her protocol droid gold and has him zap Luke into unconsciousness near an old Jedi temple. While Han, Chewie and R2-D2 jumped in to save Luke, Leia rode off with other soldiers to find Vader. She ran directly into him in an effort to get him to a nearby location where all available ships would blast, most likely killing her in the process. Han, back in the Falcon, didn’t like that last part, so he took off to save her only to have the bounty hunting Wookiee Black Krrsantan crash into his ship.

Just as the Rebellion’s plan looked like it had legs, the Empire’s own cyborg Mon Calimari Commander Karbin appeared with a Star Destroyer in tow to get Luke for himself and also confront Vader, who he planned on usurping.

After a series of battles and switching allegiances, Leia decided not to take a shot at Vader as he fought Karbin, but instead went to save Han and Luke who had each fallen in battle. Instead, Aphra helped crush Karbin to death, Vader crashed the ship that carried the captured Luke to the Star Destroyer, and everyone walked away relatively unscathed, except Threepio who had his arms torn off, his head twisted around, and a hole punched in his chest by an enraged Wookiee. Leia did arrive in time to knock Aphra out as she attempted to hold the Falcon and all its usual inhabitants hostage until Vader showed up. With that, they all flew off to their next adventure.

In the wake of the Vader Down story and in an attempt to offer readers a look inside of Obi-Wan’s journals, STAR WARS #15 examined one of the Jedi Master’s many adventures. By Aaron and artist Mike Mayhew, this particular tale kicked off with Luke flying through Beggar’s Canyon and promptly crashing his ship while Ben Kenobi looked on. Uncle Owen yelled at his young charge and declared that he’d never fly again. Feeling that young Luke might need those skills in the future, Obi-Wan made a deal with the Jawas to help them with their Tusken Raider problem in exchange for handing over the tools that the boy would need to fix the downed ship. Owen figured out who did this and once again asked Kenobi to stay out of the boy’s life, asking, “Haven’t you murdered enough Skywalkers, Kenobi?” Surely that stung, but not as much as the upcoming confrontation with the Wookiee bounty hunter Black Krrsantan that we’ll see in the next flashback issue.

Next week we check back in on Jahan Cross as he returns to his home planet of Alderaan in STAR WARS: AGENT OF THE EMPIRE – HARD TARGETS by John Ostrander and Davide Fabbri.