An old friend turns into a dangerous, but insightful enemy during the Clone Wars!

You’d think any Padawan would be happy to learn from Jedi Grand Master Yoda, but that’s far from the case in the pages of the STAR WARS: JEDI – YODA one-shot from 2004 by Jeremy Barlow and HOON. Set during the Clone Wars, the story kicked off with a pair of Jedi dying on the planet Thustra leaving their students Cal and Pix to send word to the Council about the situation.

Back on Coruscant, Yoda listened to the message along with Chancellor Palpatine and Mace Windu. The diminutive Jedi revealed that he and Alaric, the leader of Thustra, had been friends for centuries. Palpatine suggested that the Master head to Thustra and see if he could convince his friend to remain a part of the Republic instead of joining the Separatists. Even though, as Windu pointed out, he acted as the overseer of the entire war effort, Yoda agreed. 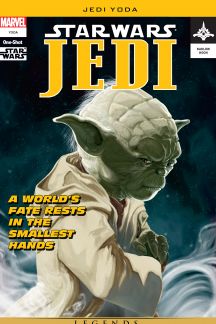 Once on Thustra, Yoda left Pix in charge of the Republic forces and asked Cal to accompany him. The wise warrior took every chance to explain the old ways of the Jedi to Cal, specifically that they did not begin as a group of fighters, but the Padawan refused to take these messages to heart.

After talking with Alaric and not coming to the desired conclusion of Thustra rejoining the Republic, Yoda and Cal jailed found themselves jailed. The elder Jedi went peacefully, though his young companion wanted to try and fight their way out.

Before long, Alaric’s nephew Navi attempted to insert himself into the situation by telling Yoda that his uncle had been losing his faculties. Another chat with his old friend seemed to diffuse that idea, especially as the man explained to Yoda that Thustra planned to leave the Republic because it had become too corrupt.

Thanks to misinformation spread by Navi and his cohorts as well as the building tensions between the people of Thustra and the Republic army, confrontation soon erupted. Not everyone survived the skirmish, but Navi and his conspirators did eventually find themselves under arrest for crimes against the Republic and conspiracy to commit murder.

Unlike just about every other person that’s ever appeared in a Star Wars film, book, comic, video game or cartoon, very much remains unknown about Yoda. For instance, his native planet and exact species still remain a total mystery, though we have seen others of his kind like fellow Jedi Council member Yaddle. The Grand Master of the Jedi Order, Yoda spent a great deal of time—something like 800 years—training younglings before sending them along to more fully study with their Masters. He did take on his own share of Padawans, though, including Count Dooku, otherwise known as the leader of the Separatists and Sith Lord Darth Tyranus!

Next time, Tom Veitch, Chris Gossett, Janine Johnston and David Roach take us back 4000 years before “A New Hope” in STAR WARS: TALES OF THE JEDI.