One of the wonderful things about Star Wars is the opportunity for the emergence of surprising break-out characters beyond the big superstars like Luke, Leia, Vader, and Obi-Wan—we’re talking about left-fielders such as Boba Fett, Aayla Secura, and Wicket.

In anticipation of the big issue, we caught up with series writer Simon Spurrier, who told us about his favorite Trip tales from the fan-favorite book.

Marvel.com: Why do you think this dastardly droid’s become so popular?

Si Spurrier: Well Trip's always great value for the money. He's the king of the unnervingly polite throwaway horror… "Do please raise the gate, sir. As delightful as it would be to de-skin you like a fruit, time is of the essence.”…from DOCTOR APHRA #26.

You'll be able to find plenty of cute moments like that, and they're really more valuable than the big beats when it comes to defining his character.

Marvel.com: What are some of the more flashy moments?

Spurrier: The end of issue #19, where it's revealed Trip has been manipulating Aphra not just to retrieve his memories, but as a twisted psychological long-game to try and show her that she's very similar to him. He comes frighteningly close here—"Love is murder..."—to admitting that he has feelings for her. It was my take on a sort of reverse-Pygmalion, where the only way Trip can imagine not killing his former mistress is converting her into a reflection of himself. And he came pretty close to succeeding. This scene plants seeds which blossom into the main thematic meat of the WORST AMONG EQUALS arc, which is only now nearing its conclusion.

Marvel.com: Triple-Zero can come off so innocent sometimes!

Spurrier: Yeah, like shortly after the midpoint of issue #24. Aphra's spent six issues caught between loads of competing enemy factions. Just when she thinks she's escaped, there's a new arrival: kaboom! Her ship gets shot down, and there's this frighteningly quiet moment as the familiar silhouette ambles out of the flame and smoke, humming to himself.

And then—the very next page, I'm fond of this too, as we see Tolvan reacting to 000's actions rather than seeing them directly. Part of the reason Trip is so effectively creepy is that he seems like such a prim little C-3PO type. "Just some waddling protocol droid humming a tune," as Tolvan puts it. We almost always cut away whenever he does anything horrible, because it destroys that eerie mystique to show too much. So pages like this are really effective, where we just see all of Tolvan's doubt and incredulity become revulsion and horror. 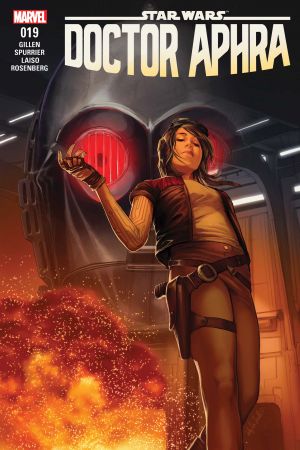 Marvel.com: Okay, then, what about when we do see him in action?

Spurrier: For that there’s issue #25, when he’s creeping up behind Tam Posla and letting rip. "Hello. I am Triple Zero—Human-cyborg relations and atrocities." And of course the end of this issue, where Aphra wakes up knowing that she's been bonded to 000 by means of an explosive implant, and he will almost certainly try to kill her the moment he wakes up. Dum dum dumm...

Marvel.com: You said before about the droid’s supposed feelings for Aphra—are they similar in any way?

Spurrier: In issue #26 the whole thing is about exploring that idea that 000 and Aphra are remarkably similar. In this one issue we see, for instance, that 000 isn't just a cold-hearted killing machine; he clearly has a lot of sadness and loss concerning the seeming death of his pal BT-1. And this whole arc turns on the beat at the end of this issue, where he just can't stop himself from killing people, no matter how pointless. It gets him and Aphra in a lot of trouble.

Marvel.com: And we believe it all reaches a head in DOCTOR APHRA #30?

Spurrier: Big moments include: 000 finally getting back his long lost memory, amongst which he discovers a truly shocking secret... Aphra and 000 make the painful realization that they're about as close to being soul mates as two beings can get. That's a scary, disgusting, but weirdly comforting thought.

Short version of all this: 000 is a hilarious/scary black-mirror version of C-3PO, and you won't have to look too hard for moments that show that. But he's also got a lot of very cool layers of complexity, and the current arc, WORST AMONG EQUALS, is almost entirely about peeling them back one by one.

LGBTQIA+ characters from a galaxy far, far away grace the covers of your favorite Marvel Star Wars comics starting in June.

Get Your First Look at 'Star Wars: The Mandalorian' #1

Check out all eight covers and interior artwork for 'Star Wars: The Mandalorian' #1, on sale July 6.