The Best Marvel Halloween Costume Ever

Looking for the perfect costume? Look no further than AVENGERS #1

You know how it is: October brings thoughts of Halloween and you just can’t wait to pick out a ghoulishly great costume. You look to Marvel for inspiration, natch, but you’re overwhelmed by the colorful coterie of out costumed characters. You’re stymied, but we have a suggestion.

The Best Marvel Halloween Costume Ever: The Hulk as Mechano the Clown.

Whoa, there—don’t click away. Hear us out. Prepare to be amazed.

So, way back in AVENGERS #1 (the original 1963 one, True Believers), the Hulk’s minding his own business when Loki, god of mischief, starts to play mind-games with the green galoot and brings none other than Iron Man and Thor breathing down on his chartreuse neck. What does the big guy do about it? He goes into hiding, of course, but clever Hulk that he is, he does it in plain sight.

As a circus clown.

Yeah, we thought so, too: Genius. 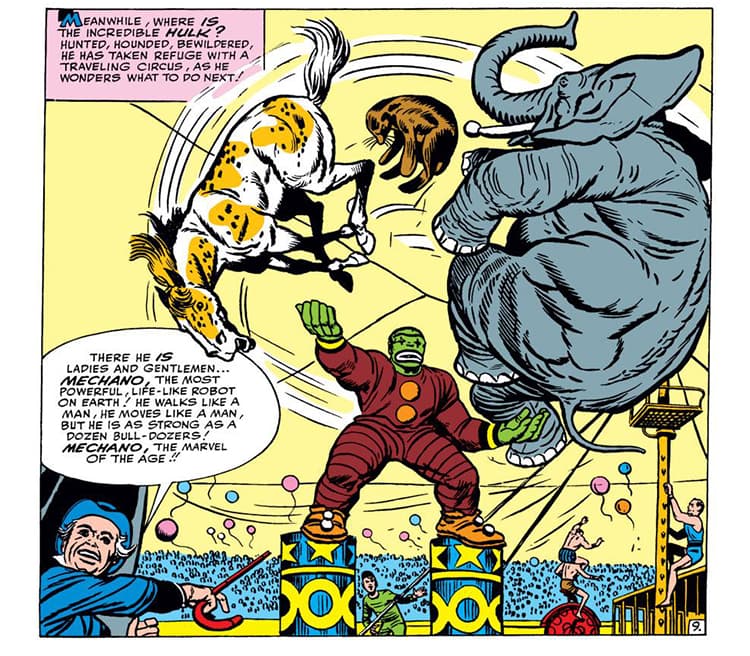 Mechano the Clown, the “most powerful, lifelike robot on Earth,” and the “marvel of the age” hides a secret—underneath the greasepaint on his face, the yellow-and-red striped tights and the crimson pom-poms, it’s our ol’ pal the Hulk taking refuge in a circus and pondering his next move while juggling full-grown animals to the sheer amazement of the circus-goers and his bosses. And he does it stylishly.

It doesn’t stand for too long, though, regretfully. Iron Man and Thor and their new compatriots Ant-Man and the Wasp see through the disguise and break up the Hulk’s act. Still, Jadejaws chose his costume well, ‘cause he fooled, like, everybody else in the world as well as somehow using fabrics that withstand falling into a giant crevice created by ants, a steel cylinder dropped on him by ants, and busting out of both (without the aid of ants). When he wipes the “stupid makeup” off his face and the “masquerade” comes to an end, it’s Hulk hammer-time and the crowd roars…but not with laughter.

Oh, it’s a wonderful, weird moment in Marvel history, brought to us by the likes of Stan Lee and Jack Kirby and something that could only happen in those hallowed days of comic book yore. And for those reasons, we’re calling it as we see it: The Best Marvel Halloween Costume Ever.

Halloween-lovers and cosplayers, take note. You will never be outdone ever again if you take our lead. The Hulk will thank you at the very least.