Spidey joins Secret Wars, gets his original black costume and much more in a very busy year! 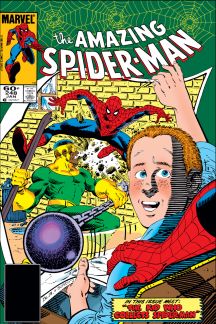 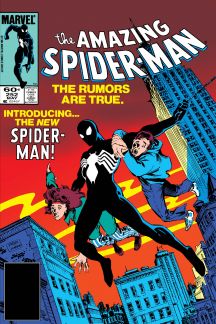 In SECRET WARS #1, the webslinger found himself among his fellow super heroes as they zipped across the galaxy to act as gladiators on the Beyonder’s Battleworld – a battle which continued through the entire SECRET WARS 12-part limited series. He reappeared back on Earth in AMAZING SPIDER-MAN #252 after many trials and tribulations, but supporting an all-new black costume, a variation on his original suit (how he got it was shown in SECRET WARS #8). Black Cat caught up with him again in SPECTACULAR SPIDER-MAN #90, and he caught up with Black Widow and Daredevil to help them finish a case in MARVEL TEAM-UP #141. 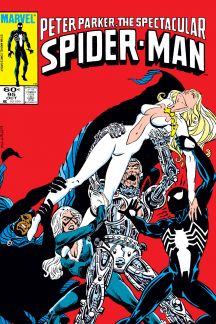 Following a clash between Moon Knight and the White Dragon in MARVEL TEAM-UP #144, and a visit to Cleveland with Iron Man to confront Blacklash in MARVEL TEAM-UP #145, Spidey suffered his arm pulled out of its socket by the assassin Puma in AMAZING SPIDER-MAN #256, as well as his new costume seemingly gaining a life of its own. To add insult to injury, Mary Jane Watson revealed to him in AMAZING SPIDER-MAN #257 that she’d known his secret identity as Peter Parker all along. Trying to push his troubles with MJ and Black Cat aside, our hero sought out Mr. Fantastic in AMAZING SPIDER-MAN #258 to subdue his black costume, which turned out to be an alien symbiote leeching off of him. 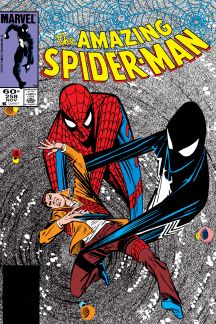