The History of Spider-Man Events and Crossovers: Part 1

As Spider-Geddon rages across the mighty Marvel Multiverse, we take a retrospective look at the Spider-Verse's most notable events!

From INFINITY GAUNTLET to SECRET EMPIRE, event series are a huge part of what makes the Marvel Universe so powerfully immersive...and with the cataclysmic SPIDER-GEDDON tearing its way across the Spider-Verse right now, we thought we'd examine the history of Wallcrawler crossovers!

It might seem like they’ve always been there, but it wasn’t until after the Golden Age had come to a close that Marvel established a fully realized shared universe for the first time. Even then, the cameos—the Fantastic Four and Namor in issue #4 of their series, THE AVENGERS #1 in ’63, 1966’s TALES OF SUSPENSE #80, and TALES TO ASTONISH #82, and a few other notable instances—were only relatively small cameos.

Arguably, it wasn't until the beginning of the Bronze Age in the early 1970s that there was a fundamental change in the nature of crossover events. And naturally, given Spider-Man's popularity, the separate series of the Marvel Universe started to come together with spider silk.

Here's Part 1 of our three-part analysis of Spider-Man events and crossovers. In a way, it all started with...

From the very beginning, Spider-Man was out there looking for super buds. In the first ever issue of his solo series, Spidey auditioned for the Fantastic Four by trying to break into the Baxter Building (he really earned that “shows initiative” bit on his resumé). The Fantastic Four would later collab with Spider-Man many times, but this story might be the most important because of what it put into the works.

Because of J. Jonah Jameson’s scathing Daily Bugle reports of Spider-Man being a public menace, the world had turned against him, extending out into even other Super Heroes. When the Fantastic Four turned him down because of his bad press and their resulting distrust of his motives, Peter’s feelings were seriously hurt. This story set the stage for the main personal conflict of the series—the teen-turned-Super Hero who resents his powers and the responsibility they bring—but also the long-running subplot that Spider-Man just can't seem to fit in the with the cool super kids. This complex and fascinating dynamic between him and the rest of the Super Hero community set him up as the perfect catalyst for future crossover events to come.

In the early ‘70s, Spider-Man acted as the lead character in a series called MARVEL TEAM-UP in all but ten of the series’ 150 issues (and six out of seven annuals). Each issue followed a specific format—Spider-Man would face a conflict and be helped out in facing that situation with another hero. Sometimes this co-star was a firmly established hero in their own right, but other times the issue took the opportunity to bring obscure unknowns to the spotlight. This marked the first series to center around the concept of crossover team-ups, and none other than Spider-Man was at the helm from the start of its decade-long run.

CONTEST OF CHAMPIONS was among Marvel’s very first limited series. It may have only been three issues long, but it made a serious and lasting impact on the world of crossovers. 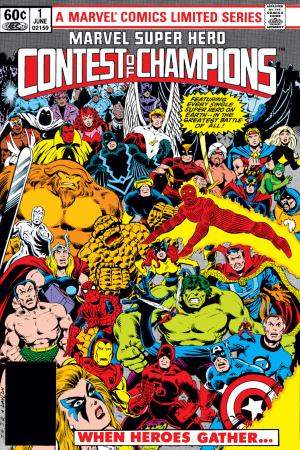 The plot revolved around an Elder of the Universe, the Grandmaster, challenging Death to a game that could restore the life of his recently deceased brother, the Collector. Using Earth’s heroes as cosmic pawns, they selected teams of twelve to compete. Given no other choice, Super Heroes like Captain America and Black Panther were forced to do the bidding of these strange and powerful eternal beings and fought each other in an epic celestial showdown.

The plot of SECRET WARS is this: A powerful intergalactic entity known as the Beyonder abducts Earth’s mightiest heroes onto a ship, much like the events of CONTEST OF CHAMPIONS, but with one significant caveat: the greatest villains of Earth are also on board the ship with them! When they all reach their destination, a construct called Battleworld, they are ordered to fight each other to the deaths with the reward being their ultimate heart’s desires. The heroes and villains inevitably fight right off the bat because of their histories, but there is also division within the ranks of both sides as well. In a an additional twist of complex and nuanced storytelling, a few key Super Villains choose to put past grievances aside and work with their supposed archenemies to try and get back home.

If you weren’t aware, the 1984 SECRET WARS event was a pretty big deal; it set up a lot of moving pieces that would come back into play in subsequent storylines so the event itself had long-lasting implications for the Marvel Universe, as opposed to the no-strings “one-shot” nature of many previous crossovers. For example, Spider-Man wound up finding a new black costume on Battleworld in issue #8. At first it seemed like just another costume change—many heroes on Battleworld found some spiffy new threads as well—but Spidey’s drastically different costume would follow into his own series as well (AMAZING SPIDER-MAN #252). If you read the elaborate hints set out in SECRET WARS, it’s clear that something mysterious was up with this suit and that mystery would become one of the most celebrated Spider-Man co-stars of all time: Venom!

This series marked the first time that Spider-Man joined up for a crossover event with his nemesis Venom. But in order to defeat Venom’s wayward son, Carnage, the almost identically-clad heroes had to reluctantly work together.

The mirroring of Spider-Man and Venom, and the ways in which they ideologically rubbed off on one another would make both characters the richer for their encounter while adding depth to their relationship and helped Venom become an important Marvel character in his own right, independent of Spider-Man.

With so many Spidey team-ups on the books, one might wonder where the X-Men fit into all of this? Well, never fear, because the nine-issue series AXIS brought Spidey and the X-Men together in a big way. Of course, this story started out with the exact opposite of friendly camaraderie—enter Red Skull’s his telepathic onslaught called “World War Hate”. As a moral inversion had made most of the heroes bad and the villains good, Spider-Man ended up as one of the last heroes standing unimpaired by the inversion and found himself allying with Magneto, Carnage, and more inverted villains to put a stop to the brain-washed Avengers and X-Men. 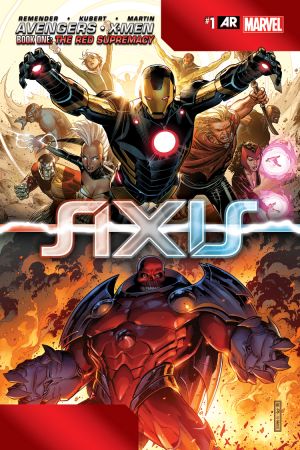 Carnage, one of Spider-Man’s former Super Villains, had his own “Venom in MAXIMUM CARNAGE” moment by sacrificing himself to destroy the X-Men’s gene-bomb, making Spidey promise to make a rhinestone statue of him to honor the act. Spider-Man said it was the worst man he had ever known doing the noblest thing he’d ever seen, and so Carnage achieved what he’d wanted most since his moral inversion: true heroism.

This was coupled with a video recording Carnage made before his death in which he and the other then-inversed villains claimed full responsibility for the evil actions of the Avengers and X-Men to exonerate them in the eyes of the public after the inversion was over. The world would not remember Carnage the hero, but Peter would...and so would we.

So far we’ve covered Spider-Man crossovers with characters established from his own series, as well as other teams like the Fantastic Four and the X-Men, but Peter Parker’s relationship with the Avengers is the most complicated of all of his dynamics with super teams. The animosity that the Fantastic Four first felt for Spidey in 1963 set a precedent for other big-time heroes to follow; three years after his rejection from the Fantastic Four, Spider-Man was the topic of debate among the Avengers in AMAZING SPIDER-MAN ANNUAL #3. Unsure of his worthiness as a recruit, they decided to test the hero and in doing so, drive a wedge even further between themselves and the Web-Slinger, each thinking the other deficient. 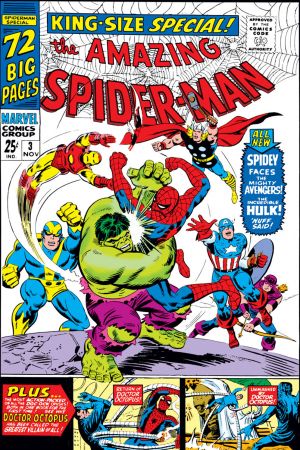 That decade of MARVEL TEAM-UP comics must have done wonders for Spidey’s reputation, because Peter eventually came very close to joining the Avengers again in AVENGERS #236-#237 and even got an invite from Cap—alas, this time he was foiled by the government who convinced the Avengers to reconsider on their behalf.

Spider-Man finally managed to join the team in AVENGERS #314-318 but was quickly, though ever politely, fired after only four issues on the payroll. It wasn’t until NEW AVENGERS that Peter got on the team and really made it stick. So it’s no wonder Spider-Man has the ability to empathize with the greatest misfit of the Super Hero world, Deadpool.

Deadpool has long idolized Spider-Man. Deadpool wants to be good, he tries to be good, but he still ultimately fails over and over again. Deadpool holds himself up against Spider-Man’s standard of justice and ethics—most obviously during their first meeting in DEADPOOL #11 when Wade Wilson and Blind Al went back in time and replaced Peter and Aunt May from a 1960s-era issue of Spider-Man. 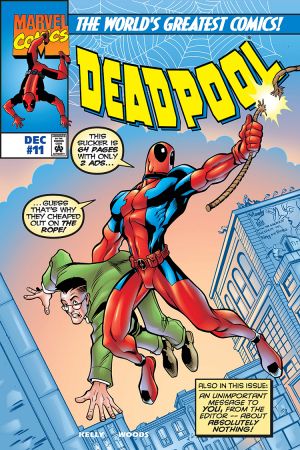 In their first real substantial conversation, Deadpool callously hurled Peter off of a bridge (not knowing that he was Spider-Man), only realizing after the fact that—oops!—he probably killed that guy. Ever since that encounter in CABLE/DEADPOOL #24, the two continued to banter and argue whenever they crossed paths. In time, Spider-Man has grown to see himself in Wade and empathize with his struggles and constant quest for redemption.

After the traumatic events of SECRET EMPIRE, Deadpool chose to wipe his memory of the last five years rather than live with what he had done. But, as we shall discover when we discuss ONE MORE DAY in Part 2 of History of Spider-Man Events and Crossovers, mind-wiping only ever seems to delay the inevitable path certain people’s stories play out in...

Keep an eye on Marvel.com for Part 2 of our look at the History of Spider-Man Events and Crossovers. And read SPIDER-GEDDON at your local comic shop now!