T'Challa recounts his origin, faces Doctor Doom, and much more!

Alongside his fellow Avengers, T’Challa heard of the Black Knight being whisked away to Arkon’s world of Polemachus in AVENGERS #84, but when he summoned Thor to transport the team there, his colleagues found themselves spirited away by the Enchantress.

Having accompanied Thor to Polemachus to aid the team, the Black Panther returned to Earth in AVENGERS #85, only to lose his fellows once again, this time to the alternate Earth of the Squadron Supreme. Thor and the Panther searched for their comrades in AVENGERS #86, but Earth’s Mightiest Heroes made their own way back and with a mighty tale to tell, too.

Later, T’Challa followed a ruling by Avengers chairman Captain America in SUB-MARINER #35 to attend a charity event with other teammates instead of flying off with Thor, Iron Man, and Giant-Man to fight Namor, the Hulk, and the Silver Surfer at the request of the United States military. 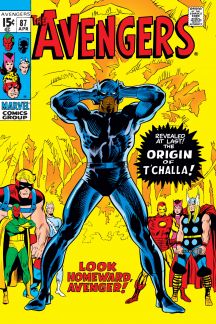 Iron Man noticed that the Black Panther seemed distracted in AVENGERS #87, and in answer to the charge T’Challa regaled his teammates about the details of his origin and his homesickness for his native Wakanda. Upon hearing of the death of a friend, he pondered whether or not to return to his country or renounce his throne and remain an Avenger.

Still concerned over the monumental decision, T’Challa jetted off to Wakanda in ASTONISHING TALES #6 when he heard that a long-dormant volcano there flared to life. Upon investigation, he discovered an invasion by Doctor Doom to steal the country’s most valuable resource, the sound-absorbing metal vibranium. In ASTONISHING TALES #7, the Black Panther fell under Doom’s assault, but freed himself to chase off the despot by threatening to blast all the vibranium to atoms.

While tracking a stolen Wakandan weapon, T’Challa would up in prison in a white supremacist nation in FANTASTIC FOUR #119, prompting a rescue by the Thing and the Human Torch, as well as a battle with Klaw. At this time, T’Challa also tried out a new codename, “Black Leopard,” but ultimately returned to his traditional moniker.

After consulting with Earth’s Mightiest Heroes in AVENGERS #99 over the appearance of the demi-god Hercules at their mansion, the Black Panther answered a summons from attorney Matt Murdock in DAREDEVIL #92 to pose as the Man Without Fear and squelch rumors of the hero’s true identity. Another call for help arrived in AVENGERS #100, that time from the Black Knight who required the Panther’s aid in breaking Ares and the Enchantress’ hold on fabled Olympus. 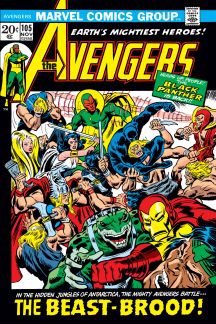 T’Challa formally returned to the ranks of the Avengers in AVENGERS #105, just in time to accompany the Scarlet Witch and other teammates to Chile in search of missing scientists, and then to the Savage Land to confront a band of mutates known as the Beast-Brood and the siren-song of the alluring Lorelei.

Still on the track of missing persons reports in AVENGERS #106, the Black Panther and his allies stumbled upon an abandoned HYDRA base and a new scheme of the Space Phantom. Once captured by the alien trickster, the heroes discovered another villain lurking in the wings: the Grim Reaper.