Look back on the group’s most fearsome female members!

Women have long defined and contributed to both the successes and failures of HYDRA and its foot soldiers. Below, we take a look at several of the ones who have formed the group.

Valentina Allegra de Fontaine
The so-called Contessa made an incredible impression on Nick Fury when they first met, sending him tumbling in unarmed practice combat on his first day with S.H.I.E.L.D. Since that debut, Fontaine has changed allegiances multiple times being revealed as both a Skrull and then, later, an agent of HYDRA.

Spider-Woman
Jessica Drew joined HYDRA with idealism in her heart. Sold a false bill of goods by a crafty recruiter, she truly believed the group to be on the side of the angels. Over time, though, she found out the truth of HYDRA’s goals as well as what they had done to her memories and abilities. She would, in time, agree to be a mole for the terrorist group inside S.H.I.E.L.D. but quickly came over to that team’s side, becoming a triple agent.

Madame Jasmine
A member of the HYDRA subdivision dealing with the occult—DOA—Jasmine spent most of her HYDRA career tangling with the Nightstalkers.

Viper
While many have taken the title “Madame Hydra”—including the Contessa—perhaps no one has laid claim to it as long as Ophelia Sarkissian aka Viper. A member of HYDRA since being taken in by the organization as an infant orphan, Viper has proven the rare true believer who has survived multiple battles, leadership coups, and arrests to return to the group again and again. While predominantly a S.H.I.E.L.D. foe she has often run aground of other heroes like the Avengers and Wolverine, the latter of whom she married. She even ruled Madripoor for a time before being overthrown by Iron Man and Tyger Tiger

Elsie Carson
When Carson’s husband got injured at work, she picked up a job to help with the slack. It turned out that she found that job with HYDRA and while her tasks initially amounted to just errands, she rapidly became more active in the organization until she achieved a promotion to section head. When she encountered Team America she reconsidered her allegiance. However, after she and her family were nearly killed by a HYDRA death squad, Carson decided to swear off all kinds of espionage and disappear off the grid with her husband and children.

Silver Fox
A former lover of Wolverine who seemingly met her end at the claws of Sabretooth, Fox nonetheless resurfaced years later as a HYDRA section leader. She seemed to spend most of her time monitoring Wolverine and other former Weapon X program graduates and derailing any attempts for them to regain accurate memories of their lives. History eventually repeated itself when Fox reached out to her one-time paramour, seeming to be heading towards putting HYDRA behind her, only to be killed by Sabretooth once again.

Man-Killer
After Katrina Luisa Van Horn’s skiing career fell apart due to a chauvinist running her off the slope and badly injuring her, she turned to super villainy to regain control of her body and to make money. While not a major player in HYDRA, she has periodically aided the organization as a freelance hire and even spent a short time as a full agent.

Ms. Fischer
A HYDRA recruiter under the direct direction of Baron Von Stucker, Fischer played a major role in the subjugation of S.H.I.E.L.D. She predominantly posted at the HYDRA base Gehenna in New Zealand.

Cassandra Romulus
Initially part of a cell marked for deletion by Baron Von Stucker, Romulus readily betrayed her team leader, killing him and earning her former hunter’s attention and desire. They became lovers for a time during which Romulus continued to impress Von Stucker with her physical skill and her boundless ruthlessness.

Laura Brown
Born to a HYDRA leader, Laura quickly took to the family business with skill and zeal. However, she quickly grew disillusioned with the mission. This climaxed when Nick Fury headed a raid on the HYDRA base that Brown had been staffing. Rather than kill the S.H.I.E.L.D. Director, she protected him and he returned the favor in short order by allowing her to escape his own troops. On the run while Fury tried to get her immunity from prosecution, Brown had to repeatedly repel HYDRA attempts to murder her. When those attempts failed, her old group changed tactics and instead attempted to frame her as Supreme Hydra. While briefly successfully, this effort, too, Brown eventually overcame and Fury finally secured her immunity and a spot on S.H.I.E.L.D. as an operative.

Scorpion
Thasanee Rappaccini spent her early years as Camilla Black until the deaths of her adopted parents resulted in her learning her biological mother had been one of A.I.M.’s Scientists Supreme. This led her to initially join S.H.I.E.L.D. in the hopes that working with them would lead to her finding her mom. At some point, it seemed she became disillusioned with the group and jumped HYDRA instead, becoming partners and lovers with the mole in the Initiative Program, Hardball. She eventually revealed herself to still be with S.H.I.E.L.D. and just spying on HYDRA when she persuaded Hardball to turn himself in and robbed him of his powers.

Read about the next level of HYDRA’s woman warriors in CAPTAIN AMERICA: STEVE ROGERS #14! 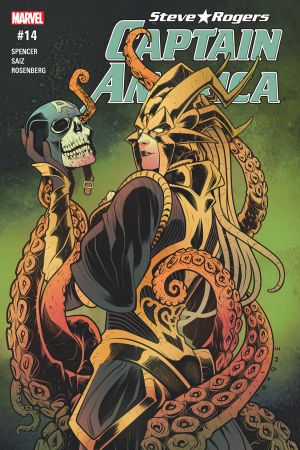 In this article: Hydra