The Longest-Lasting Marriage in the Marvel Universe

Relive the highs and the lows of Reed Richards and Sue Storm's relationship!

Today, FANTASTIC FOUR #5—the landmark 650th issue of the series—will bring Ben Grimm and Alicia Masters together as husband and wife.

It’s fitting, because their courtship goes back to the earliest days of Marvel's First Family. But of course, the Fantastic Four are no strangers to Super Hero weddings; the union between Reed Richards and Susan Storm was one of the biggest comic book weddings of all-time. But it wasn’t the spectacle that made Mr. Fantastic and the Invisible Woman’s wedding so memorable...it was the ebb and flow of the relationship that had its share of ups and downs.

Like any couple, Reed and Sue have faced adversity together and their bond has been tested. However, they have remained together throughout their trials, and since their wedding in FANTASTIC FOUR ANNUAL #3, it’s been a love story that hasn’t lost its spark.

Years prior to the birth of the Fantastic Four, Susan met Reed when he was a boarder at her aunt’s house. Their instant attraction eventually brought them together, like the fateful night that created the Fantastic Four itself... Susan and her brother Johnny Storm were so loyal to Reed that they accompanied him on a test space flight alongside their mutual friend, Ben Grimm. 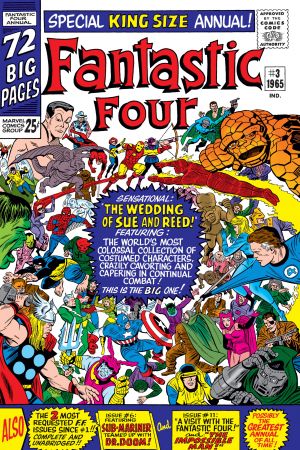 But gaining super powers actually worked against Reed and Sue’s relationship. In the early issues of FANTASTIC FOUR, Susan was visibly upset that Reed spent most of his time cooped up in his lab and ignoring her. That may be why she was initially open to the affections of Namor the Sub-Mariner.

Namor never bothered to hide his attraction for Sue, even though his megalomania prevented any true affair between the two. Susan ultimately choose to remain with Reed, even as she challenged his somewhat archaic views about women; despite his genius, Reed was a product of his era, reflected in the way that he often dismissed Susan whenever she disagreed with him.

It took some time for Reed to truly accept that Susan was his equal as a partner, and that her views mattered just as much as his own. Today, the Richards have a more equitable relationship, which has ultimately strengthened their connection. However, there were times when their marriage was threatened by more than the ruler of Atlantis.

In FANTASTIC FOUR #141, Susan left Reed after he unilaterally decided to shut down the mind of their son, Franklin. Reed only acted to save the solar system from Franklin’s powers, but it alienated Susan. Eventually, they were able to overcome their issues, restore Franklin’s mind, and renew their commitment to each other...but it was touch-and-go for a while. 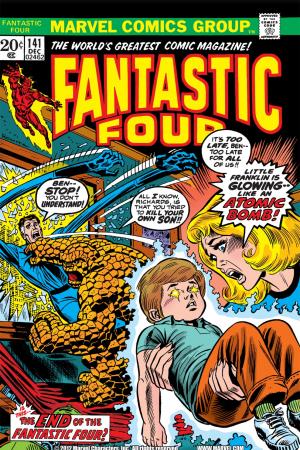 Years later, the first Super Hero CIVIL WAR once again drove Reed and Susan apart. Susan initially stood by Reed when he supported the Superhuman Registration Act. But she was quick to recognize the damage it was causing, and left Reed to fight alongside Captain America’s resistance. Even though Reed and Susan reconciled during the final battle, they still felt the need to leave the Fantastic Four and rehabilitate their marriage first.

FANTASTIC FOUR #381 tested their bond in another way, when Reed was seemingly killed by Doctor Doom. In the face of all evidence of Reed’s death, Susan believed her husband was alive. She even resisted the temptation to have a rebound relationship with Namor, who still lusted after her. More impressively, Susan stepped up as the leader of the Fantastic Four, and she held the team together until they finally located Reed in the distant past and brought him back to the present.

It would be inaccurate to suggest that Reed and Susan have a perfect marriage; there’s no such thing as a perfect marriage. Even now, Reed can have a tendency to do things without consulting his wife. In this week’s FANTASTIC FOUR #5, Susan’s going to discover that Reed has upgraded their new headquarters...and didn’t bother to tell her until she got home. Who could blame Susan for being a little upset about that!?

So, why have Reed and Susan endured for all of these years? It all comes back to the love they share for each other. Their commitment to each other is so strong that it withstood the loss of their second child in FANTASTIC FOUR #268. But because of the incredible nature of their lives, that child—Valeria—was given a second chance at life in FANTASTIC FOUR #54. 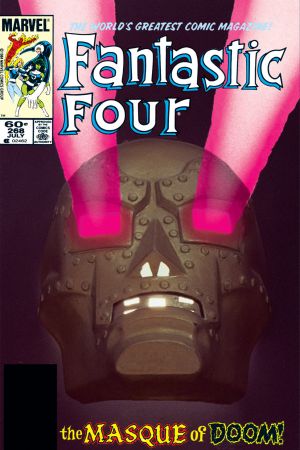 During 2015's SECRET WARS, Reed was forced to deal with the apparent loss of his family after the destruction of the Multiverse. In the new reality, Victor Von Doom had claimed Reed’s family as his own and made Susan his wife. However, not even God-Emperor Doom could keep Reed and Susan apart for long...

The Richards and their children recently returned from a five year journey across the Multiverse. And now, we get to watch their ongoing love story unfold within the pages of the new FANTASTIC FOUR ongoing series.

Hopefully, Ben and Alicia will have just as much success in their union...which starts today!