The Many Hits of Boba Fett

Read our comic picks for your favorite bounty hunter in Mandalorian armor. It’s all on Marvel Unlimited.

He is known throughout the galaxy as Boba Fett, the most famed (or just plain notorious) bounty hunter in this quadrant or the next.

The clone of renowned warrior Jango Fett, Boba was raised from infancy to be the perfect Mandalorian hunter—surrounded by an aura of mystery, and only seeking work from the highest bidder.

Rebel rascals and Scavenger scum stand little chance at escaping his expert pursuit. With a near perfect track record, and a warrior’s arsenal, Boba is sought out by clients from within, and outside, the Empire.

Long and short of it: he is a mercenary of indiscriminate taste. Nothing personal—he’s just about those credits.

Although Fett reveals his face to few, we've managed to capture the man behind the Mandalorian. Here’s our comic hit list of the Galaxy's Most Dangerous, all available to read on digital comics mega-library, Marvel Unlimited.

HANDING IT TO HAN

In this issue from Marvel’s first STAR WARS series, Boba’s exchange with Darth Vader plays out on panel when he’s tasked with handling the carbonite-frozen body of Han Solo.

This comic also depicted one of the most famous scenes in cinematic history! Hint: "I am your father."

THIS IS HIS WAY

After a Hutt's misguided affections led to a death contract on a faraway planet, Boba Fett was hired to pursue Magwit “The Magician,” a motley-dressed fool whose parlor tricks concealed a dangerous connection to the “Pirate of Bar-Kooda.” The fact that this “magician” had died only posed a slight problem for the bounty hunter, as not even the dead can escape Boba Fett! 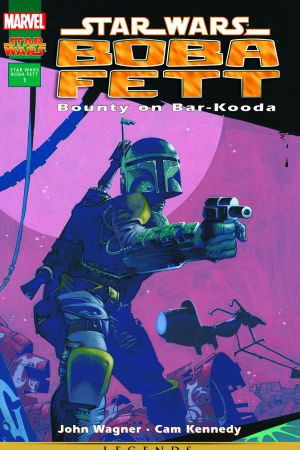 Continue with STAR WARS: BOBA FETT - MURDER MOST FOUL (1997) #1 for another reprehensible hit job commissioned by Gorga the Hutt, this time against the in-laws!

ENEMY OF THE EMPIRE?

Before the events of the first Star Wars film, Darth Vader employed Fett on a search-and-retrieval mission. Boba had to discover and return to Vader a single small box, the contents of which could have easily changed the fate of the galaxy. For such an important mission, Vader could not rely on a single operative… unbeknownst to Boba. 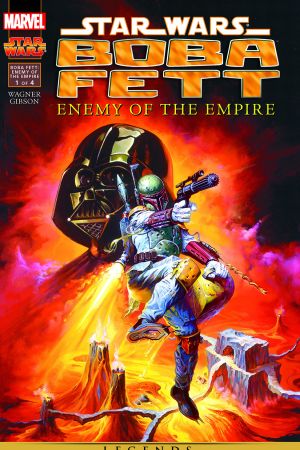 Our next Boba-cious chapter, STAR WARS: BOBA FETT - AGENT OF DOOM (2000) #1, takes us to the Gulma province, home to a flatheaded turtle-looking race called the Gulmarids. By this point the Empire had fallen, but a rogue Imperial Death Ship continued a reign of terror across the stars, systematically rounding up species as slaves, or worse, wiping them out to use as engine fuel or water.

Not one for sentiment, it’s hard to explain why Boba accepted Slique Brighteyes’ modest offer of one hundred credits to slay the scientists behind Gulma’s doom. Could it be that underneath that helmet was a man changed by his pitfall with a sarlacc?

“THE RIGHT MAN FOR THE WRONG JOB”

Summoned to settle the score between two warring factions in STAR WARS: BOBA FETT - OVERKILL (2006) #1, Boba Fett quickly showed his employers the importance of always choosing the right tool for the job. Once unleashed, Fett's drive to follow through on a bargain was unshakable, and both groups realized they were dealing with a much deadlier mutual problem. Boba Fett on conflict resolution… who knew?

Imperial Era one-shot STAR WARS: AGE OF REBELLION - BOBA FETT (2019) #1 ought to be called the “Age of Reveling,” because Boba had the time of his life trying to kill Zingo Gabnit, a fellow bounty hunter who’s beyond the pale job history was too much for even Fett.

To the tune of one hundred thousand credits, Boba trailed Zingo through the Outer Rim’s not-at-all-ominous Death Plains, to find that a desert township had already been laid to waste by the murderous merc. Zingo proved crafty, but in the end, even an opportunistic, double-dealing bounty hunter has to follow the code.

Don’t hunt “bad men.” Don’t hunt “criminals." And don’t hunt “murderers.” What do you hunt and only hunt, Boba?

These are just a handful of picks from an entire catalog of Star Wars comics, classic and new, all available on Marvel Unlimited. You can read more of our favorite Boba Fett stories here, or choose from hundreds of other series starring Jedis, droids, Wookiees, bounty hunters, and more from the ‘70s-onwards.