The Origin of Spider-Man's Most Powerful Foe

Look back at the early days of the Miles Morales: Spider-Man co-star, Rhino!

One of Spider-Man's most historic villains reveals previously unseen depths in this week's MILES MORALES: SPIDER-MAN #2 by Saladin Ahmed and Javier Garron...

The Rhino, AKA Aleksei Sytsevich, might have mysteriously changed up his tactics recently, but since his original appearance back in AMAZING SPIDER-MAN #41, the man-mountain's been putting his horn down, getting a good head of steam, and smashing his way into trouble.

Created by Stan Lee and John Romita in 1966, the Rhino made his debut running towards the border of the United States mumbling to himself about all the time he'd waited before going on this as-yet-unrevealed mission. Peter witnessed this unstoppable force for the first time on the news when reports stated that he seemed to be heading straight for the Big Apple. He came face to face with the villain that night when he finally made his way to New York.

Once inside the city limits, Rhino revealed one of his targets to be Lieutenant Colonel John Jameson! Spidey didn't arrive in time to stop J. Jonah Jameson's son from getting taken, but did catch up to them down an alley. During the ensuing fight, which the wall-crawler just barely won, Rhino revealed that he'd been hired by another country to kidnap Jameson! 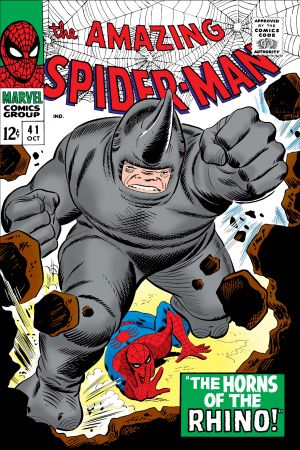 In the following issue, the cops had Rhino in custody only to realize they couldn't get his costume off or pierce his skin. When he woke up, he began to escape after smashing things up, but got knocked out again by tranquilizer spray.

The Rhino's initial adventure came to an end in issue #43, after his second attempt at a prison break succeeded and made the news, interrupting his very first dinner with Mary Jane Watson (who debuted at the very end of issue #42).

While waiting for Spidey to show up so he could exact his revenge, Rhino remembered how he gained his powers; up to that point he'd been hired muscle for a spy ring with ties only to the highest bidder. When his bosses presented the idea of an experiment to make him nigh unstoppable, he agreed and withstood months of injections and treatments before they put the rhino suit on him with a molecular adhesive. He then decided to go out on his own and smashed the lab up. 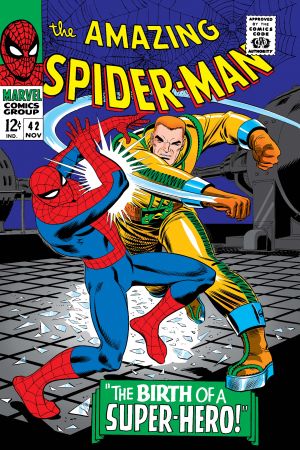 Back in the present, the web-slinger caught up with his quarry after slipping away from MJ. The titanic tussle began in an abandoned alley, but eventually moved out to a crowded street. During the fracas, Rhino would have ended Spidey's hero career forever had a brave policeman not pulled him away from falling girders, a distraction that allowed the villain to make his escape unimpeded.

To give himself an edge in their eventual rematch, the arachnid-themed hero asked Dr. Curt Connors to analyze a piece of Rhino's costume. Having rigged up something potentially dangerous and untested, Spidey still swung off to wait for Rhino to attack John Jameson again.

When the villain appeared, our hero sprayed him with webbing filled with a chemical that dissolved his costume! With his advantage melted away, Rhino couldn't stand one powerful punch from "Puny" Parker and got knocked unconscious! 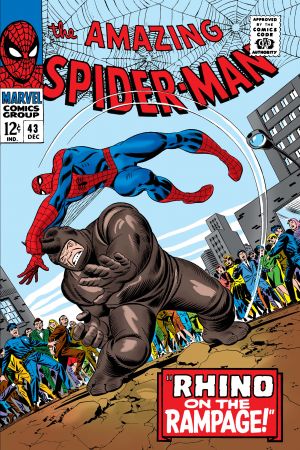 Since then, Rhino's backstory has been rounded out, but he's also become one of the strongest, most relentless villains in the Marvel Universe, going up against other heavy hitters like Hulk, the Defenders, and just about every other Spider-related hero—including Miles Morales right now!