Prep for the Boba Fett and Luke Skywalker issues of 'Star Wars: Age of Rebellion' with this flashback!

Before we all settle into to read today's much-anticipated STAR WARS: AGE OF REBELLION – BOBA FETT # 1 and next month's STAR WARS: AGE OF REBELLION: LUKE SKYWALKER #1, let’s take a look back to a time not too long ago, yet still in a galaxy far, far away... A time when these two galactic icons duked it out for fate of the galaxy…or at least for a little breathing space and a few credits.

Wearing the simple clothes of your average Rebel hero, Luke Skywalker wades into the fracas with nothing but a lightsaber, a blaster, and his faithful astromech R2-D2…

And in This Corner

Wearing used but well-kept Mandalorian armor, Boba Fett enters the fight wielding not only his trusty blaster rifle, but a cornucopia of deadly gadgets designed to deal death to all opponents…

The house of the later Obi-Wan Kenobi on the far-off planet Tatooine, where Skywalker seeks answers to his questions about his destiny as a Jedi and Fett seeks the pilot who destroyed the Empire’s Death Star.

Fett finds Skywalker searching through the house’s scattered furnishings after a Tusken Raider attack and tosses a flash grenade to gain an immediate advantage. It works: the grenade goes off and blinds the young Rebel as well as incapacitates his droid. 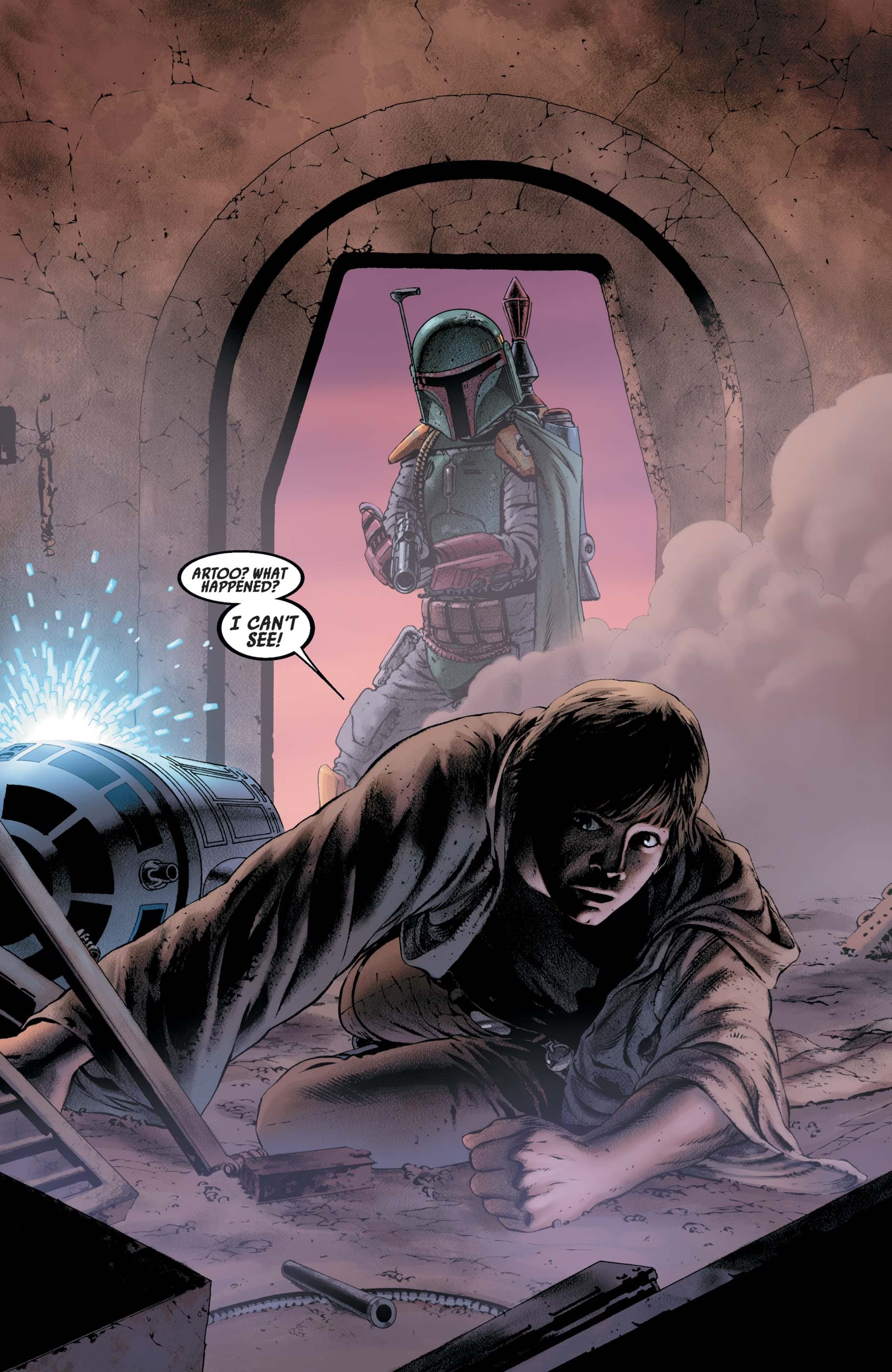 Round One to Boba Fett.

Skywalker tries to stand but receives a vicious blow to the head from the bounty hunter’s rifle butt. Staggered, he lashes out with his fist, but connects with Fett’s armor and gains nothing but bruised knuckles. To insure his prey stays down, Fett follows up with a solid kick to Skywalker’s face. 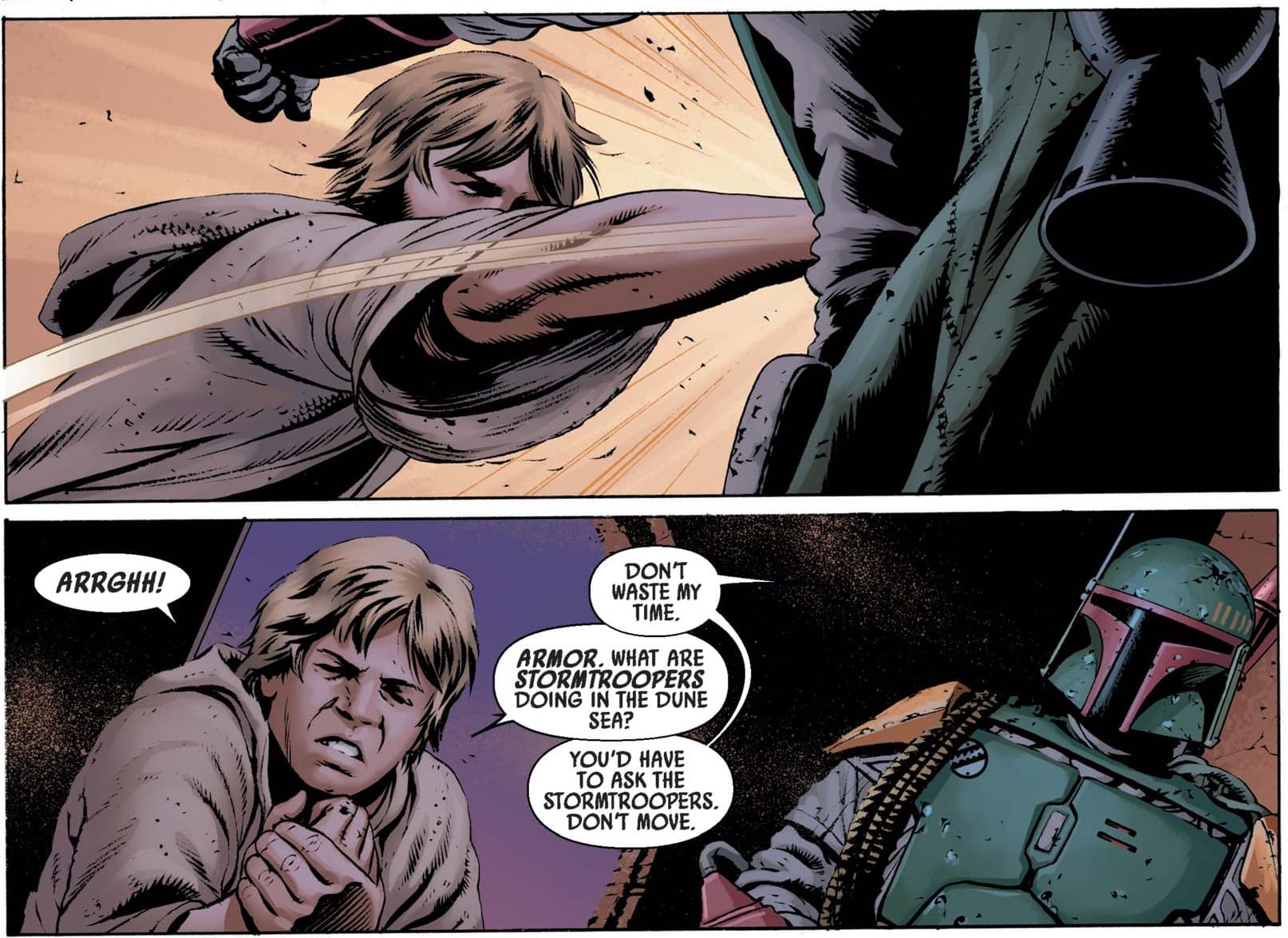 Round Two to Boba Fett.

The Rebel pilot ignites his lightsaber and makes it to his feet, swinging wildly. Fett easily avoids the weapon’s path and fires a weighted rope line from his wrist gauntlet. Incredibly, though blinded, Skywalker cuts the line with his lightsaber, which in turns forces Fett to back up and fall over backwards onto the prone R2-D2. 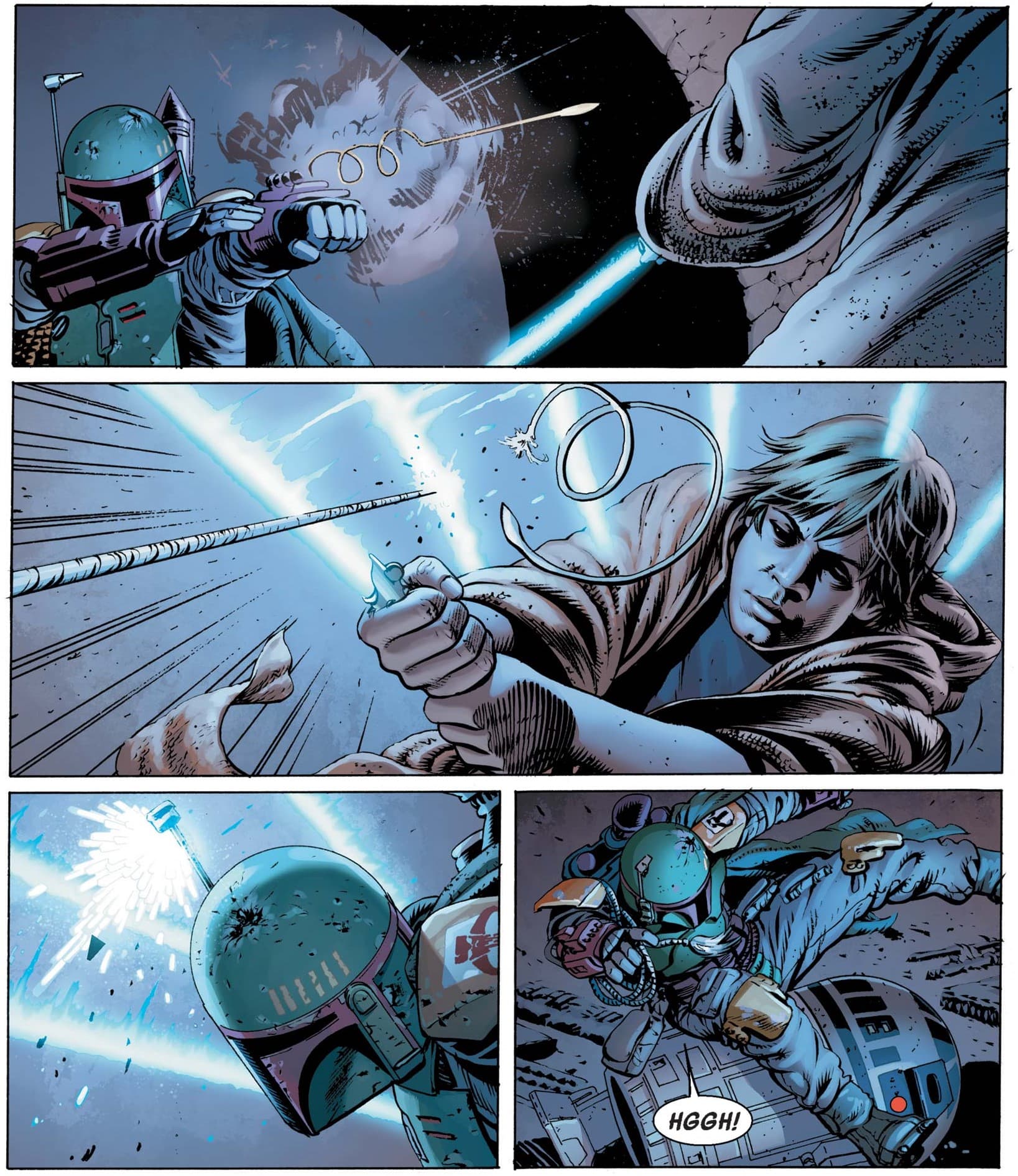 Round Three to Luke Skywalker.

Fett fires up his rocket pack and flies at Skywalker to slash at him with his bladed armor. Now bleeding, Luke appears defiant, but takes a blaster shot to his shoulder from the bounty hunter. He deflects a second shot with his saber only to be hit by a flying tackle from his foe which sends his weapon flying out of his grasp. 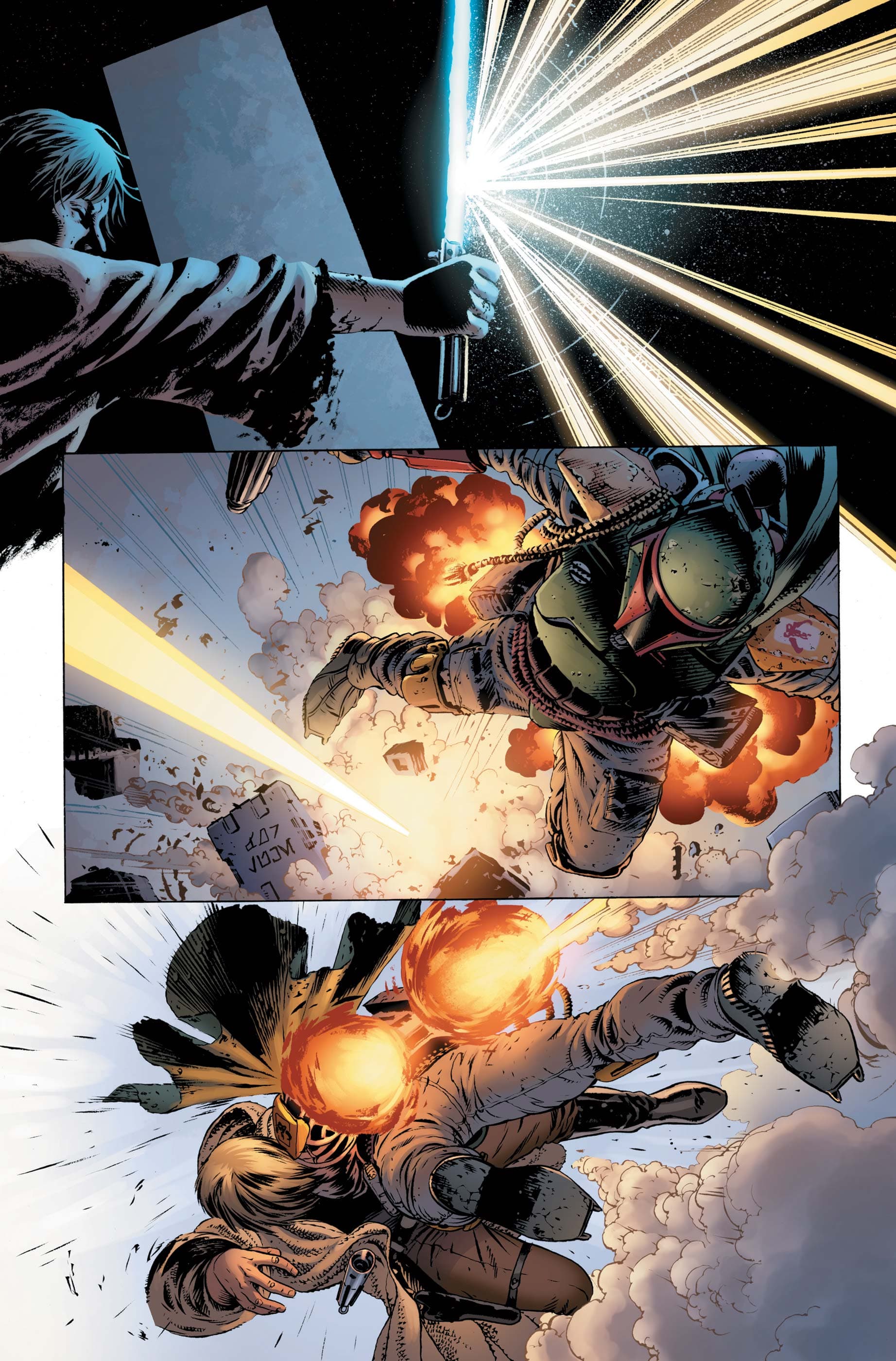 Round Four to Boba Fett.

The two combatants grapple for the lightsaber after Skywalker somehow manages to retrieve it. Fett presses the pilot’s arm down to cut him with his own weapon, but suddenly a metal box seems to spring up from a nearby place on the floor by itself, fly through the air, and slam into the bounty hunter’s helmet, knocking him out completely. 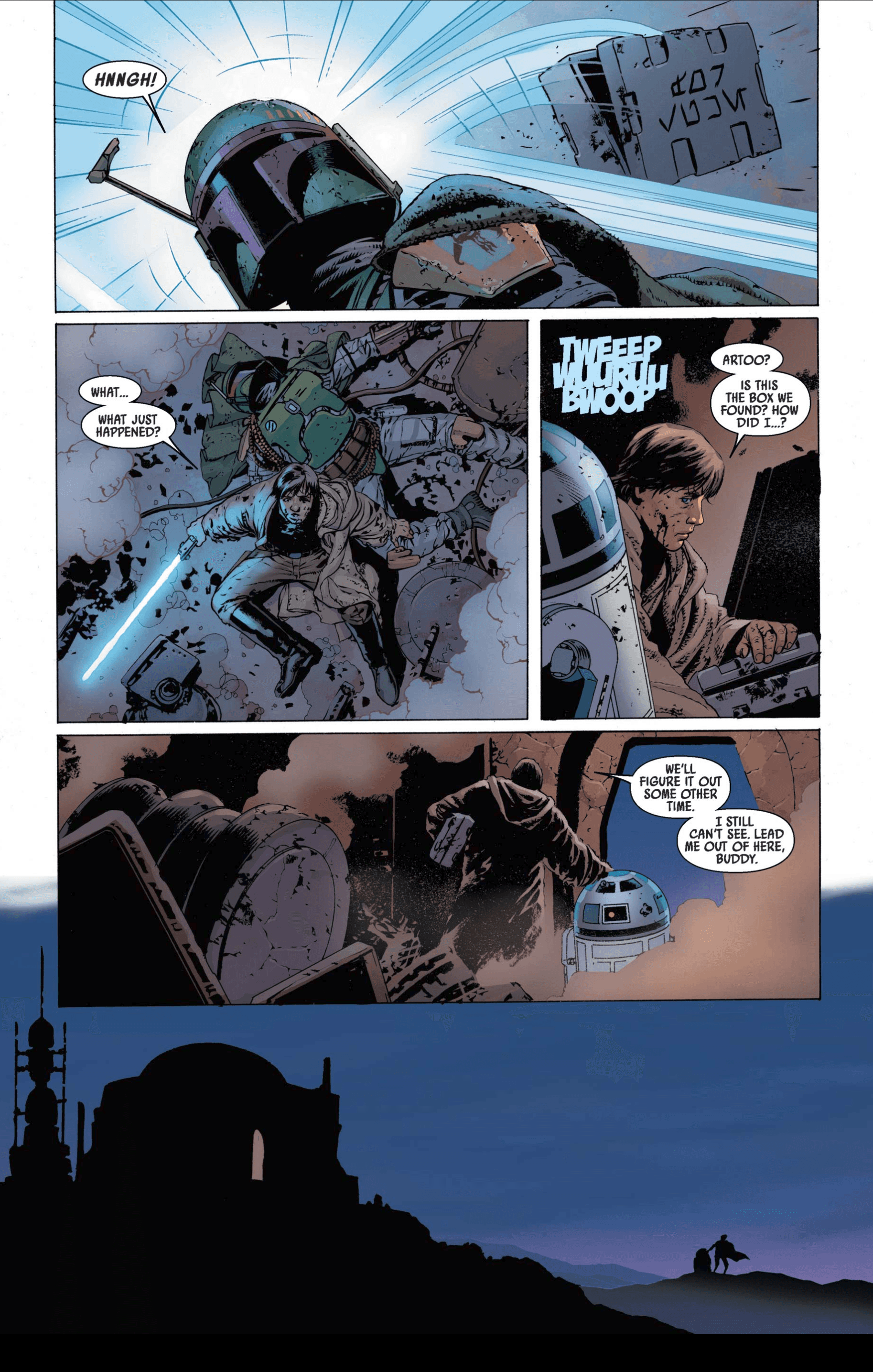 Round Five and Match to Luke Skywalker.

The Rebel leaves the house and Tattooine with quite a prize—the Journals of Obi-Wan Kenobi—while the bounty hunter leaves with a precious piece of information for his employer Darth Vader: the name of the pilot who destroyed the Death Star. Both men win in a way...though the galaxy becomes an even deadlier place for all concerned.

Everything You Need to Know About 'Star Wars: Doctor Aphra'

Revisit the original series ahead of next month's new #1!

A New Era Begins with 'Star Wars: The High Republic'

'Star Wars: The Rise of Skywalker' Gets the Marvel Comics Treatment This June
1 month ago