Frank keeps coming no matter what you throw at him...or him out of.

In the Marvel Universe, you don’t choose your destiny—your destiny chooses you.

For Frank Castle, this sentiment rings true like an eardrum listening to bullet fire off in a small room. A soldier of fortune who accepts payment in vengeance, Castle adopted the mantle of the Punisher to keep the world in check.

Frank keeps coming no matter what you throw at him—or him out of. In his career, certain moments stand out where it’s bananas that even a guy like Castle didn’t get dead…

Frank Castle learned to survive and to kill during war-time. It’s not far off to say that the roots of the Punisher started there. Altogether, he served four years, and then some more time running black ops missions. Even with a family waiting for him, he felt an immense sense of duty…right?

Reunited with his family, Castle and company finally took some needed time together, when they stumbled on a mafia hit.  Not being the type who enjoys witnesses, the criminals decided to eradicate the problem swiftly. Frank survived, and knowing that cops sat comfortably in the mobs’ pocket, he started down a long bloody path.

Frank stands out from all the other close calls during Dark Reign by being the guy who fought the biggest baddies around, while having no super powers. Apparently, attempting to pop Norman Osborn brings about the full wrath of the Sentry. Barely surviving this, Castle became the target of the Hood, and eventually Daken. 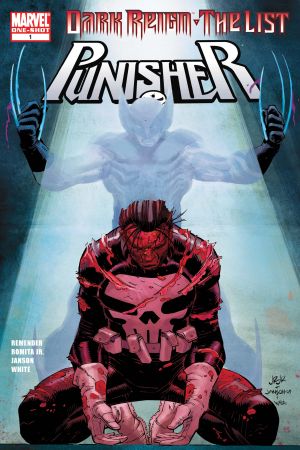 Ok, so technically the Daken thing turned out to be more of a slaughter than a close call. However, this served as the catalyst for some other “you gotta be kidding me” moments with the man in black. Back from the dead courtesy of Morbius, Franken-Castle battled alongside a monster army to thwart an even crazier villain.

Civil War had the potential to go really well for Frank: he joined the resistance, he saved Spider-Man, and he even aided in some major initiatives. However, when a pair of villains came a knockin’, looking to join up, Castle did the only logical thing—murdering them in front of a room full of heroes. Captain America, of course, took exception to this.

In this article: Punisher (Frank Castle)