The Secret History of the Iron Fist

Take a cue from today's Avengers #13 and travel back in time to the early days of K'un Lun!

Today, Jason Aaron and Andrea Sorrentino's AVENGERS #13 takes readers back in time to 1,000,000 B.C. and introduces them to Fan Fei, the first person to ever hold the power of the Iron Fist after defeating a dragon known as “Shou-Lao the Undying.”

To celebrate the release of this issue, we're taking a look back at the comic book roots of the Immortal Iron Fist and the ancient source of its power. So join us for this crash course on an ability that goes far beyond a pair of glowing knuckles...

Created by Roy Thomas and Gil Kane, Danny Rand, AKA the Iron Fist, made his first-ever debut in 1974’s MARVEL PREMIERE #15. Readers get an explanation of how Danny came to K'un Lun at the age of nine after his parents perished in the Himalayas, but there is no mention of Shou-Lao or the origin of the Iron Fist’s powers. In the issue, Danny, now in full mastery of the Iron Fist title, must prove his worth in combat and show that he can become an immortal citizen of the ancient city. 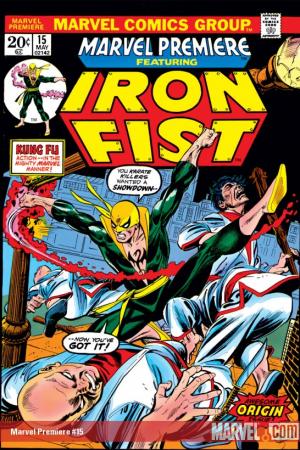 It would take only one more issue for the dragon (the one who lends himself to the now-iconic brand on Danny’s chest) to make an appearance. MARVEL PREMIERE #16 is actually subtitled “Heart of the Dragon.”

Under the tutelage of Lei Kung the Thunderer, Rand toughened up his fists by thrusting them into buckets of sand and rocks over and over again until they became calloused and numb to pain. But Danny still craved more power—what he really wanted was revenge against Harold Meachum, the man who tore his family apart.

Hearing the young warrior’s plea, K’un Lun’s leader Yü-Ti reluctantly told Danny about acquiring the power of the Iron Fist. Traveling to a cliff on the outskirts of the mystical city, Rand fought Shou-Lao, who was cursed to forever guard his “molten” heart, which was long ago torn from his body. The dragon proved to be a formidable foe, but Danny defeated him by...hugging the dragon. 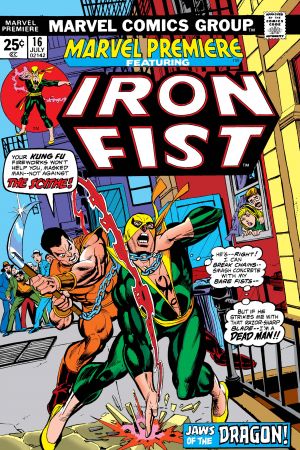 No kidding—by blocking off the dragon-shaped scar on the beast’s chest (where his heart once resided), Danny was able to subdue the monster and venture into its cave. However, the always-smoldering scar on Shou-Lao’s chest gave Danny his very own identical marking.

Two years later, readers received even more backstory on how Shou-Lao came to guard the power of the Iron Fist in MASTER OF KUNG FU ANNUAL #1, this time from Doug Moench and Keith Pollard.

In this story, it was told that Shou-Lou was “slayed” many years ago by Quan St’ar, a former citizen and magician of K'un Lun who eventually sought its destruction. Many years ago, during an exhibition of dragon riding, one of the animals went berserk and tried to attack the gathered crowd. Quan St’ar then leapt forward, risking his own life to cut out the dragon’s heart and save everyone.

Instead of being praised, however, he was banished for killing a sacred dragon that served as the everlasting energy source for the city. That sacred creature was none other than Shou-Lao the Undying. Yü-Ti resurrected the slain beast by turning its heart into a molten substance and charged Shou-Lao with guarding it inside the cave that Danny would visit years later.

However, the wrongful slaying of Shou-Lao that placed Quan St’ar in eternal exile led to a long-standing vendetta against K'un Lun. That being said, the dragon also proved to be the villain’s undoing when Danny uses the power of its heart to defeat Quan St’ar in combat with the invaluable help of Shang-Chi, the Master of Kung Fu. 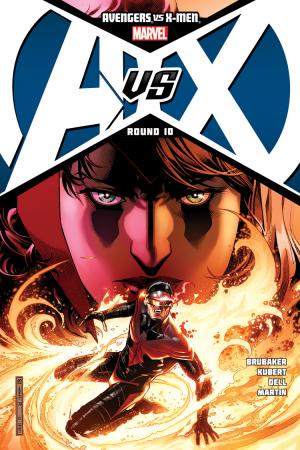 Still, Shou-Lao wasn't just a means toward an end. In AVENGERS VS. X-MEN #10, Hope Summers enlisted the help of Danny Rand’s old teacher, Lei Kung, to prevent Cyclops from killing a bunch of people. Proving that Shou-Lao was truly “Undying,” Hope and Lei Kung flew in on a reborn version of the dragon, which whooped Cyclops’ butt for a few moments. Unfortunately, the dragon was too young and susceptible to the mutant’s devastating laser beams. No matter; by simply touching the beast, Hope was able to recreate its green fire power and repel Cyclops to the moon. It was during this moment that we learned about how the legend of Shou-Lao once defeated “the Phoenix itself.”

Unlike Danny Rand and Quan St’ar, Fan Fei (AKA the first Iron Fist) did not defeat Shou-Lao in a way that affected his heart. After being found guilty of teaching kung fu to cavemen in the outside world, Fei was shunned and sentenced to death at the hands of the dragon. While the cavemen weren’t so lucky, Fan punched the beast right in its ugly face...and came out the other side of his head.

This act gave Fan Fei the Iron Fist power, but she was subsequently exiled into the outside world, the highest punishment known in K'un Lun. Contrary to later iterations of those special few who held the power, Fan Fei considered her newfound abilities to be a curse, not a blessing. Nevertheless, her murder of Shou-Lao revealed that the dragon was immortal and could be reborn countless numbers of times. As a result, Lei Kung decided to end her exile and offer her the title of the city’s “greatest defender.” But Fan decided to decline the offer, and who could blame her?

In AVENGERS #13, a new version of the story of Shou-Lao’s resurrection is told. Instead of being reborn by Yü-Ti’s hands, he is inadvertently revealed to be an immortal being...