The Master of the Mystic Arts teams with the Avengers against Asgardian menaces!

Co-workers can be a real drag. Sometimes they eat your lunch out of the community refrigerator, sometimes they talk way too loud on the phone, and sometimes they unleash Asgardian demons with their dying breath. We’re not sure about those first two, but Doctor Stephen Strange’s one-time colleague Dr. Benton definitely did that last one in the pages of DOCTOR STRANGE #177 by Roy Thomas and Gene Colan.

That kicked off a story running from DOCTOR STRANGE #178 into AVENGERS #61 that pitted the Master of the Mystic Arts against Surtur the Fire Demon and Ymir, the last Frost Giant. In an attempt to stop the gods from coming forth, Strange first recruited Dane Whitman, The Black Knight, to track down the Sons of Satannish in Tiboro’s dimension.

Since the Sons aided Benton before he discarded them, they held important information about his ultimate plans. Doctor Strange and Black Knight battled valiantly, keeping each other safe from Tiboro’s many attacks until eventually the realm ruler agreed to relinquish control of the Sons of Satannish into their custody. 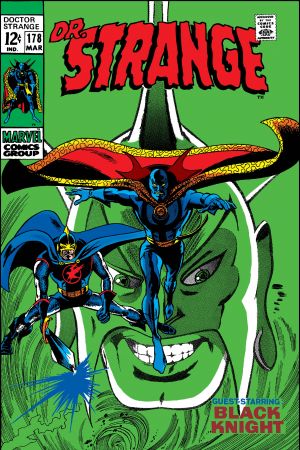 From there, the story continued in AVENGERS #61 by Thomas and John Buscema as Black Panther, Vision, and Hawkeye answered Strange’s call for help, discovering their seemingly comatose teammate Black Knight in the good doctor’s care. Strange performed a life-saving surgery on Whitman to bring him back to the land of the living. After some exposure to Hank Pym’s Rejuvenator, Black Knight joined his teammates in their race around the world to stop the invading evil.

Vision and Black Panther traveled by Quinjet to Wakanda where Ymir raged, while Strange stayed at Avengers Mansion and Black Knight and Hawkeye fought Surtur in the Arctic Circle. While his fellow heroes waged battle valiantly, Strange prepared a spell of his own with the Crystals of Conquest.

Just as the endeavor seemed most hopeless on all fronts, the Sorcerer Supreme used the Crystals to transport both behemoths onto the same field of battle mid-swing. Upon appearing in front of one another, they lacked time to stop their earth-shattering blows and negated one another’s presence with a massive “THROOOM” that sent them back to their respective realms.

If you’re wondering where Doctor Strange’s new threads came from in this story, he needed to don them in DOCTOR STRANGE #177 in an effort to stop Asmodeus, who turned out to be none other than Dr. Benton. In the previous issue, the villain thought he stripped Stephen of his mystical objects and hurled him in a mystical dimension along with Clea. Thanks to a series of preparations before rushing into battle, Strange soon found himself re-powered, but had to don a disguise upon returning to his home dimension because Asmodeus had stolen his face to try and get the Book of Vishanti away from The Ancient One. Realizing the benefits of keeping his identity a secret, Stephen continued wearing this disguise for a period.