Doctor Strange entered SECRET WARS right alongside the main architects of Battleworld: Doctor Doom and Molecule Man. As the new reality kicked off in the second issue of the series—after the fall of both the main Marvel and Ultimate Universes in issue #1—we soon discover that Stephen held a high office in God Doom’s court.

The Sheriff of Agamotto presided over a dispute between Mister Sinister and the Captains Britain of Higher Avalon. As he said, Strange served Doom himself, acted as his right hand and described his judgment as final. “I am the law,” he explained.

Later, he conversed with Doom’s daughter Valeria, her father’s left hand, otherwise known as the Foundation. She informed him of the newly discovered life raft that held the evil Cabal members. The existence of something that existed before Battleworld troubled Valeria, but Strange attempted to shut her down. He called the thing’s existence “Schism” and said it needed quarantine.

After the Cabal exited their ship, but before Strange investigated it himself, he spoke with Doom who grew tired of the sheriff’s constant recounting of various transgressions between various realms. “You are omnipotent, not omniscient. The danger to your throne, and this world—the last world—comes from what we do not know.”

Before long, Strange investigated the Cabal’s craft and the dead Thor there. After sending out the troops to find the escapees, he met Miles Morales who explained that he remembered the old world. Not long after, Strange, Miles, and the newest Thor retreated to The Hidden Isle of Agamotto where the sheriff showed them another life raft ship that he’d never opened. This one held Mr. Fantastic, Black Panther, Captain Marvel, Thor, Star-Lord, the Phoenix-empowered Cyclops, and Spider-Man. 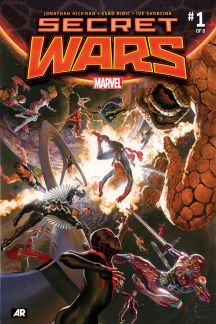 Strange told the newcomers that they’d been in stasis for eight years, in which time he and Doom built the world. He once again admitted that he turned away from the power of being god but still felt that Doom had done good work.

When a battle broke out between the Cabal and the Thors, Strange teleported the heroes to the conflict. Thanks to Mr. Fantastic’s appearance, Doom also joined the fray and soon dispatched Cyclops. Seeing that something big and bad loomed, Stephen Strange sent the extra-dimensional characters to all corners of the battle-globe.

Far from happy, Doom confronted Strange, asking where he’d sent them. Strange refused to respond, but clearly seemed conflicted about saving people from the true world while also staying loyal to Doom. After Stephen asked how Reed Richards would respond upon discovering that Doom had stolen his wife and children in this reality, the god used his power to strike the sheriff down.

Though Doom threw a funeral and covered up his own involvement in Strange’s death, the Sorcerer Supreme managed to give the survivors enough time and space to eventually take down God Doom by the end of the series.

During the epic Secret Wars, Doom and Strange acted as friends because they’d been through so much together. As if surviving one universe and keeping another intact wouldn’t be enough, Strange also revealed to us that he stood right next to Doom when he remade this world. They attempted to save the savable and make up the rest as they went. Strange also unveiled that he could have been god instead of Doom. “And I remember that you did not want it,” Doom said. “I still don’t…but I do remember…and know how precious what we have left is,” replied Strange. “So I guard it fiercely.”

Next, Doctor Strange and his companions head to the future along with the Guardians of the Galaxy to save humanity in GIANT-SIZE DEFENDERS #5 and DEFENDERS #26-29.

Read ‘Death of Doctor Strange’ on Marvel Unlimited to find out!