The Spells of Doctor Strange: The Concordance Engines

Revisit when the Defenders reunited with the Master of the Mystic Arts!

The original Defenders formed when Doctor Strange realized he needed some muscle in the form of Hulk and Namor to take on a threat. Since then, the founders—plus Silver Surfer who joined not long after—have infrequently called on one another for aid.

As the new DEFENDERS title debuted in 2012, writer Matt Fraction utilized The Hulk and the Fear Itself event to set Doctor Strange, Namor, Silver Surfer, Red She-Hulk, and Iron Fist on a mission to stop Nul, a threat even more dangerous than a berserk Jade Giant. But that proved just the opening salvo of a year long journey that not only threatened all life on Earth, but also explained what makes the planet such a special place filled with amazing heroes.

To tell the story, Fraction teamed up with artists Terry Dodson, Michael Lark, Mitch Breitweiser, Victor Ibanez, Jamie McKelvie, Mike Norton and Mirco Pierfederici. After taking care of Nul, the Defenders discovered a strange, reality-altering device dubbed the Concordance Engine that fueled the rest of their adventures in the 12-issue series. 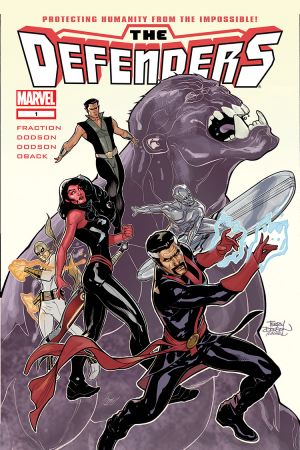 Along the way, the group lost Namor for a time but picked up Black Cat, Scott “Ant Man” Lang, and an alternate dimension Nick Fury from the 60’s. Doctor Strange accidentally brought an old flame back to life, Iron Fist fought his fellow Immortal Weapon John Aman, and reality bent as they dug further into the truth behind the Engines.

As Silver Surfer discovered and John Aman later explained, a group of incredibly powerful beings seeded Earth with the potential to defend against those who seek to destroy worlds in search of the new, otherwise known as the Death Celestials. The engines actually bent physics and probability in the favor of the heroes who would fend off destruction at the hands of the Death Celestials.

Before long the truth came to light: in moving one of the Concordance Engines, the Defenders screwed up the whole plan, allowing the Death Celestials to more easily overtake the planet. To combat the problem, Doctor Strange used the Concordance Engine itself to travel back in time in his cosmic form to alter the day Hulk asked him for help in the first issue. Not only did Past Stephen make good on a previously bad choice, but Future Stephen saved the world by essentially erasing all their meddling.

While still important to the overall story, DEFENDERS #4 acted as a Doctor Strange solo story. In the first issue he slept with a college student named Molly interested in the arcane and didn’t treat her too well afterwards. At the time he didn’t realize how lonely he had had been, but that changed when an old flame named Martha appeared out of nowhere. The problem? She was supposed to be dead. Stephen posited that he accidentally conjured her up not through magic but thanks to his proximity to the Concordance Engine.

‘Doctor Strange in the Multiverse of Madness’: Demystifying the Darkhold and Book of Vishanti

Understanding the mystic tomes at the center of the Marvel Studios’ blockbuster.

Prepare for the 'Strange Academy' finale with this recap of the students' magical journey so far.

‘Doctor Strange in the Multiverse of Madness’: The Cost of Dreamwalking and Incursions

Learn all about the most damning spell from the Darkhold.