Magic Meets Noir In 'The Flight of Bones'

Doctor Strange attempts to solve a series of murders even as his hands continue to fail him!

In the late 90’s, some of the coolest comics around came out of the Marvel Knights line. Whether it be DAREDEVIL by Kevin Smith and Joe Quesada or the PUNISHER run by Garth Ennis and Steve Dillon, the imprint allowed creators a bit more edgy freedom. That came to light in the four issue limited series DOCTOR STRANGE: THE FLIGHT OF BONES. The 1999 title featured the talents of Dan Jolley, Tony Harris, and Paul Chadwick, as they challenged the Master of the Mystic Arts to figure out a series of murders while the use of his already-damaged hands began to deteriorate.

Those murders also connected to Topaz—the young mystic who first appeared in WEREWOLF BY NIGHT #13 before palling around with Jack Russell for a while—who Strange eventually teamed up with. As it happened, the young woman found herself inadvertently wrapped up with a supposed Zen specialist by the name of Jonathan White who used his mutant abilities to grant individuals intense mystical abilities without all of that pesky training and education. If the added power to the inexperienced didn’t cause enough concern, the victims needed to return to White in a matter of hours before exploding.

Strange continued to investigate these deaths, but found himself confounded by the magic involved, which implied that another, larger entity remained at play. The next time Topaz saw White, he jammed a power-inducing charm into her chest. As he explained, she’d have to truly want to activate the power in order to receive it. 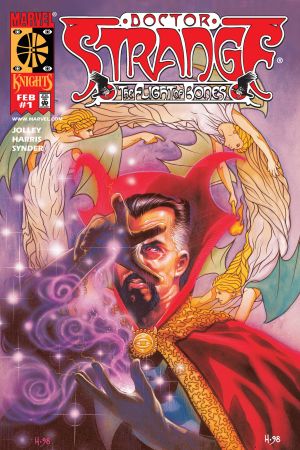 That came into play not long after when Stephen tried laying siege to White’s operation. Things got even worse moments later when Dormammu revealed himself to be the true power behind the events. After an epic battle between the longtime foes, Strange stopped his enemy and also released the people of New York City from the mystic plague.

However, trouble persisted as White revealed that the charm actually rested very close to Topaz’s heart, making it more than difficult to remove safely. In order to save his companion, Strange used his powers to induce Dr. Wilmott to perform the surgery, helping him get past the insecurity at losing a patient mentioned back in the first issue.

As Strange watched Wilmott remove the charm as he himself could have done back in his surgeon days, the mage mused on whether or not his own adventures may have spurred on the nerve damage. “Perhaps this is what the Ancient One never told him,” the narrator wondered. “Perhaps neglect of Earth’s non-magical citizens is a neglect of his own duties. Perhaps this neglect could even begin to cause him adverse effects.”

It might seem like Doctor Strange stayed out of the spotlight in the late 80’s and 90’s, but his talents and adventures actually took place in a third DOCTOR STRANGE series that ran for 90 issues. Over the years, Strange lost and regained the title of Sorcerer Supreme, crossed over with the other comics in the horror line dubbed Midnight Sons, formed the Secret Defenders and participated in events like Infinity Gauntlet, Infinity War and Infinity Crusade.

The next monthly collection of Marvel’s Stormbreakers Variant Covers are revealed.