Revisit the beginning of the end of the world for the Gods of Asgard!

After years of successfully fighting off the end of all things—also known as Ragnarok—Thor and his Asgardian allies finally fell to Loki’s forces in the 2004 Avengers Disassembled tie-in THOR #80–#85, by writer Michael Avon Oeming and artist Andrea Di Vito. 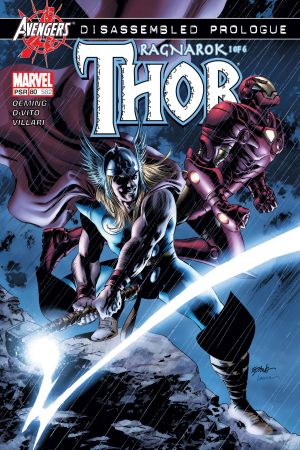 The key to the God of Thunder’s demise arrived when Loki discovered the mold that formed Thor’s hammer, Mjolnir, eons before. Not only did the God of Mischief use the mold to forge himself a piece of deadly weaponry, he outfitted his entire army with similar pieces.

Loki also made allegiances with Fenris, Ulik the Troll, and Surtur as a means to present the Odinson with as formidable a fighting force as he’d ever witnessed. And Loki’s contingent proved their might; their first battle with the heroes of Asgard left Mjolnir shattered, Sif maimed, and Enchantress dead. Thor himself nearly met his demise in the skirmish, though lived to fight another day.

Gathering the survivors of his realm, Thor retreated with his people across the wastes of Asgard, having lost the power of flight. When Fenris and Dunrok the Demolisher attacked a weakened Thor, Beta Ray Bill made a crucial arrival to his comrade’s side, helping to expel the evil duo. Bill’s reappearance gave Thor a lieutenant with the ability to lead the group as he sought greater wisdom on how the war might be won. 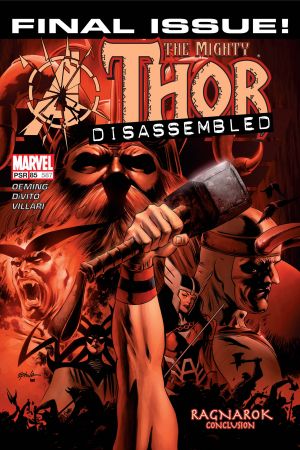 The Odinson then communed with Those Who Sit Above in Shadow—the Gods of Gods who live off the cycle of life and death. In his consultation, he learned magic that even his brother couldn’t repel.

When Thor returned to the battlefield, he defeated Loki with his newfound abilities, using his power to end the Shadow Gods’ cycle of life and death…to end Ragnarok.

In the aftermath of this epic tale, Thor went into a hibernation of existence for nearly two years. Readers thought the God of Thunder returned during Civil War, but that turned out to be a hybrid clone-robot created by Reed Richards in an attempt to calm the super hero battle.

In FANTASTIC FOUR #536, Mjolnir mysteriously appeared on Earth, seemingly watched over by a doctor named Don Blake. Blake managed to contact Thor and convinced him to return to the land of the living. The God agreed—and eventually rebuilt Asgard above Broxton, Oklahoma, where it floated until Norman Osborn led his infamous attack on the kingdom during Siege.