Today in Marvel History: The Debut of Daredevil

On this day in 1964, Hell's Kitchen welcomed Matt Murdock to the neighborhood!

by Tucker Chet Markus
Today in Marvel History: Daredevil #1 is released in 1964!

Fifty-five years ago today, the death-defying Man Without Fear made his incredible debut with the release of DAREDEVIL #1!

Written by Stan Lee with art by Bill Everett and design assists by Jack Kirby, the opening issue covered mammoth amounts of territory for the Hell's Kitchen hero. From high-flying hero action to his backstory as a child to his intimate personal relationships, Matt Murdock had a storming start in what would eventually go down as one of the all-time great character introductions.

The son of worn-out boxer "Battlin'" Jack Murdock, young Matthew was encouraged by his father to pursue an education in order to avoid a hard-knock life. (That very dichotomy, of course, would go on to define the man and the hero for more than half a century.) One day, Matthew saved a blind old man from being run over by a truck carrying radioactive chemicals. The resulting spill, however, blinded Matt—though also gifted him with superhuman powers.

The flashback concluded with the death of Battlin' Jack, and returned to the present day to tell the tale of Daredevil avenging his father's death. As well as introducing characters like Karen Page and Foggy Nelson, DAREDEVIL #1 opened up a new corner of the Marvel Universe. 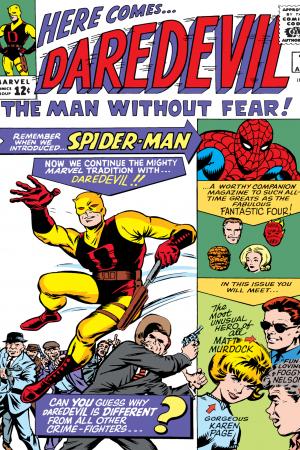 And on Wednesday, February 6, a new DAREDEVIL #1 is hitting shelves at your local comic shop! Written by Chip Zdarsky with art by Marco Checchetto, the Man Without Fear returns for a fresh story that brings Murdock out of his dark recent past.

Read the 1964 story on Marvel Unlimited now! Then head to your LCS for DAREDEVIL #1 this Wednesday!