Look inside issue #3 as the artist details his designs for the book!

Issue #3 of Tom Taylor and Mahmud Asrar’s X-MEN RED hits stores this week, and there’s already so much to discuss.

First and foremost, Jean Grey is back and she’s got a lot of catching up to do. She joins the new Red team—Nightcrawler, Namor, the All-New Wolverine, and Honey Badger—on a mission to protect mutant-kind…but it won’t be easy. As the threats against them mount on all sides, Jean and her team will get more than they bargained for. And this week’s issue also sees the debut of Trinary, a mysterious new mutant hero with technopathic powers…

We chatted with Asrar about this new character’s design, the team costumes, and more!

Marvel.com: Mahmud, what’s it been like getting started on this new title?

Mahmud Asrar: Collaborating with Tom, getting to draw the adventures of Jean Grey after her return, coming up with new costumes and new characters—it’s all just a blast! 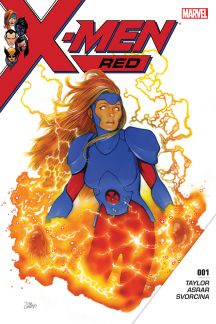 Marvel.com: Speaking of new characters, what can you tell us about Trinary and how you came up with her design?

Mahmud Asrar: Trinary! She’s an Indian girl who is a technopath. Being half from the subcontinent, I felt it was important to do this right. I wanted to give her a distinctive look both in and out of her costume. The costume itself has elements on it to convey she’s part of the team, while some subtle shapes to hint at her individual powers and Indian heritage.

Marvel.com: You’ve been doing such interesting work with the panels and action scenes in this book. It’s a cool, dynamic take on the format! How do you go about that process?

Mahmud Asrar: Well, first and foremost I try to take care of the flow of the story. Then it’s a matter of importance and beats. If the reveal of a location is important, then the panel needs to be larger. If it’s more to inform the reader, then it can be quite small. In action moments, it’s important to combine big moments with smaller moments and quick cuts in the form of smaller panels.

Sometimes, though, it’s also just about being pretty. For instance, when revealing the arrival of the hero. I can lay out the page around that thought. One thing I like to do is break the panel borders—I try to use that to guide the eyes. It also helps in some cases to fill out empty areas that otherwise would have been either too dull or unbalanced. 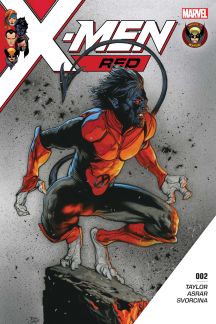 Marvel.com: What were the inspirations behind the team’s uniform designs?

Mahmud Asrar: We had the idea to base the look of Jean on her ’90s era yellow and blue costume, so I tried to achieve a modern looking visual for Jean despite basing the design on an older look. Given the name of the book, I had to put some red on her costume, of course!

One element that I enjoyed having in her design was the “X” around the mid-section, and the other costumes spun out of that aspect. I wanted to keep a consistent look without making it looking too uniform and boring. On each character I had the idea of keeping a look both based on their backgrounds and/or powers. 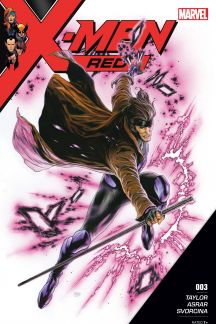 Marvel.com: There’s a time-displaced version of Jean Grey that we’ve seen in other books recently. How does your depiction of an older Jean differ from what she looks like as a teen?

Mahmud Asrar: I was fortunate enough to draw the younger Jean quite a bit on ALL-NEW X-MEN before working on X-MEN: RED. In that regard, I’ve experienced how different and how similar the younger Jean is from the older version so I try to reflect that in my art. Younger Jean, despite having similar character traits, is a little more lighthearted and the older Jean is a bit more serious. When drawing these characters it’s important to remember what they’ve gone through in their lives to shape who they are now.

Get the full story in Tom Taylor and Mahmud Asrar’s X-MEN: RED #3 on April 11!