The Origin of the Abominable Snowman

How one man's obsession transformed him into a monster.

For centuries, man has wondered about a mysterious creature living in wintery climes that may or may not hold ill will towards humanity. Readers of 1960’s TALES TO ASTONISH #13 by Stan Lee, Jack Kirby, and Steve Ditko got some answers about the elusive Abominable Snowman!

While hanging out in a Calcutta bar, Big Carl Hanson overheard a man talking about a photo he’d gotten off another bloke of the Abominable Snowman! In an attempt to alleviate the gent of his newfound responsibility and potential fortune, Carl ambushed him outside and relieved him of the supposedly cursed photo.

Carl then hopped a train to the Himalayas with big plans formulating about actually capturing the Snowman itself. Upon arrival, many natives told him that the picture would lead to his absolute ruin. Unperturbed, Carl trudged into the mountains alone in search of his quarry.

No matter how many obstacles stood in his way, Carl continued on in his search bullheadedly. He stomped through snow, assuming he could survive, only to lose himself in the process. By the end, he had turned into the Abominable Snowman himself, perfectly matching the image he carried! 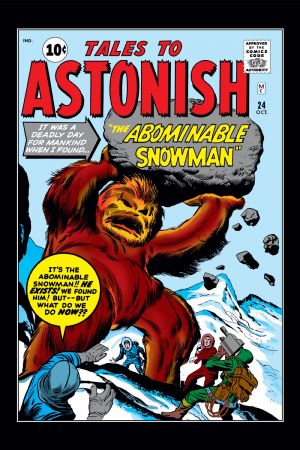 You might think that a version of the Abominable Snowman appeared the next year in another Kirby-Lee story found in TALES TO ASTONISH #24, but that’s not exactly the case. In this tale, TV hosts and rivals Victor Cartwright and Don Jordan raced to uncover the truth about the mysterious monster.

To get the scoop, Cartwright put on a costume and started traipsing around only for the real Snowman to reach out and snatch him up. This version of the Snowman had a drilling machine that took him back and forth between the surface and bowels of the planet. Once down there he realized that a group of lizard-like aliens donned shaggy suits to wander the surface as a way to stay warm.

Given the depth of this legend in general, a variety of other versions of the Snowman have popped up, each of them adding one more thing to go bump in the snowy nights!