How a Mild-Mannered Man Became a Monster

In the grand tradition of Marvel characters like Peter Parker and Donald Blake, brilliant scientist Howard still found himself picked on even with his superior mental prowess. Unlike those two heroes, though, Howard exhibited a fiery temper that not only led to plenty of fights—even with his fellow scientists—but also the desire to turn into a giant monster. Written by brothers Stan Lee and Larry Lieber with Jack Kirby artwork, this meta story from 1961’s TALES OF SUSPENSE #22 found Howard becoming the monster Bruttu after seeing him on the cover of a fantasy magazine!

Sick of being victimized and completely lacking confidence in wooing would-be love interest Anne, Howard focused on Bruttu during an accident with the lab’s “new type of atomic machine” and soon found himself turning into the creature. His increased sized and growl-like speech patterns immediately roused fear in the nearby populace, but Howard just wanted to explain himself. After crashing in and out of the subway, he came across a young man journaling and tried to communicate that way, but his attempt to use a tree as a pencil also aroused unwanted attention. 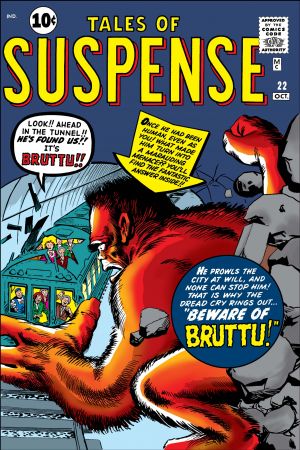 Eventually pushed too far, Howard rationalized that if everyone wanted to treat him like a monster then he better give them what they want. With that, he wrecked a carnival and resigned himself to a life on the run, but wanted to see Anne one last time. After the beast successfully communicated with her, Anne jumped to the conclusion that Bruttu killed Howard, the man she loved! Spurred on by the thought of a normal life with his beloved, he raced back to the lab, thought hard about returning to his old self and smashed the machine to bits after it succeeded!

It’s always interesting to see what kinds of characters creators keep coming back to, and the nerdy guy definitely seemed to be in Stan Lee’s mind in the early 60’s. These sci-fi and fantasy stories come jam packed with them. The very next year Lee created a gaggle of heroes who all had science backgrounds, but also had people in their lives who didn’t appreciate those kinds of achievements. Though Reed Richards seemed well-respected from the get go, Peter Parker constantly dealt with the acrimony of his peers in high school, General Thunderbolt Ross derided Bruce Banner, and even Dr. Don Blake found himself the victim of rather unkind thoughts. Their ability to rise about the insults and barbs to become world renowned heroes, though, shows what sterner stuff they’re made of!