Unleash the Beasts: Creature from Krogarr

Some people think that television will rot your brain, but in the case of a Stan Lee-Jack Kirby story in TALES TO ASTONISH #25 from 1961, it can also lead to an alien abduction!

The initial feature in the issue introduced readers to a happy-go-lucky fellow named Joe Hanson who’d rather spend a nice day fishing instead of working or playing cards with his pals instead of paying the bills. So, it came as no real surprise that he stayed home watching the tube while his wife, exasperated at his lack of ambition, went out. As he flipped between channels, he stopped on one that previously didn’t exist! Instead of static it featured the visage of an alien creature.

Through the television, the alien offered Joe fame and honor if he’d simply rewire his set to allow the unnamed extraterrestrial to transmit himself to Earth. Joe fell for it and before long the giant orange creature climbed through the box, grabbed the hapless human and returned to his home planet of Krogarr. Instead of being put through uncomfortable probing or dissection, Joe discovered his purpose on the trip: to prove that the orange one’s teleportation system actually worked! 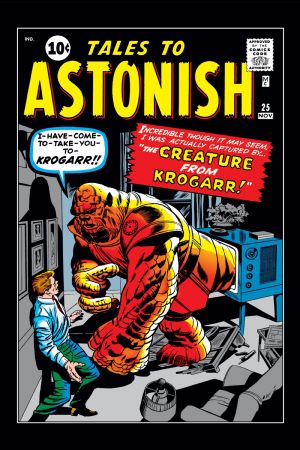 Before that, Joe got a nice tour of Krogarr including their gladiatorial games, huge flying bird creatures, and enslaved beings from a neighboring planet. Just as the alien scientist planned on showing Joe to his superiors the Earthling started fading from existence! The cruel Krogarrians saw this flaw and instantly blasted the scientist and smashed up his machine.

The next thing Joe knew, he came to in front of his television, his wife shaking him awake. See, he hadn’t paid the electrical bill, so when the power went out, so did the connection holding him on Krogarr! Apparently sometimes it pays to be a little lax with the bills!