The crimson creature makes pre-history with a dynamic debut!

Thanks to his debut nine-issue series created by Jack Kirby in 1978 and a variety of appearances since, Devil Dinosaur ranks pretty high on the list of Monsters Unleashed creatures with the most documented stories. When Kirby returned to Marvel in the late 70’s, he took over CAPTAIN AMERICA and also launched BLACK PANTHER, MACHINE MAN, and DEVIL DINOSAUR. All four series featured the master artist’s iconic style along with a variety of out-there ideas for “The King” to explore.

In DEVIL DINOSAUR #1, we met Devil Dinosaur, ruler of the prehistoric Valley of Flame, and his companion Moon-Boy. The latter cheered on the former as Devil Dino fought against the might of Thunder-Horn, an invading triceratops. That night, Moon-Boy remembered when he first met DD. He had been exploring at night—hence the name—and came across a group of Killer-Folk who had killed a female dinosaur on an active volcano. One of her babies continued to fight the folk, so they tried burning it. Instead of being engulfed, he turned red.

Moon-Boy leapt to DD’s aid and took him to the Cool Forest where the creature bathed and ate at his new ally’s instruction. Unfortunately for Moon-Boy, his fellow Small Folk refused to make nice with his new companion, so the two of them went off on their own. Over the rest of the series, Devil Dinosaur and Moon-Boy continued to battle the Killer-Folk, as well as a giant humanoid wearing a dinosaur head, invading aliens, giant ants, and even time travel-inducing witches! 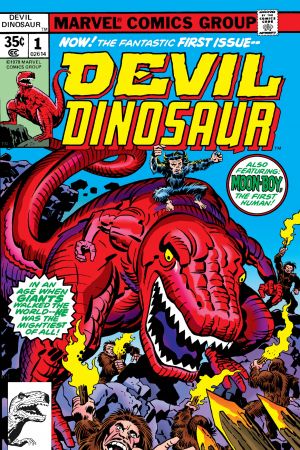 After that initial series, Devil Dinosaur appeared in GODZILLA and even joined the title team in FALLEN ANGELS. The duo has also spent time together and apart in the modern Marvel Universe in places like the Savage Land and New York City. That’s where Devil currently appears every month in the pages of MOON GIRL AND DEVIL DINOSAUR! He may have a new companion, but DD still knows how to roar against evil while watching out for a smaller pal, in this case Lunella Lafayette!