Discover the connection between an iconic Marvel monster and one of Iron Man’s archenemies!

When you think of classic Marvel monsters, it probably doesn’t take long for Fin Fang Foom to pop into your head. The infamous green—and sometimes orange—dragon with an affinity for purple shorts burst forth in the days before most super heroes came on the scene, but went on to become fully integrated into the Marvel Universe!

In the original STRANGE TALES #89 story by Jack Kirby and Stan Lee, a young man named Chan Liuchow found the dragon’s cave and woke him up to help save his village from the forces of Communist China. Fin Fang Foom didn’t exactly volunteer his services, though, but Chan tricked the creature into following him into town and scaring away the bad guys, and then led him back to his cave where the clever young man used an herb to knock him back out.

Over two decades later, in ASTONISHING TALES #23 and #24, Dr. Vault woke Fin Fang Foom up to battle another classic Marvel monster: It, the Living Colossus! In the two-issue 1991 series THE LEGION OF NIGHT, a demon named Aan Taanu took over Fin’s body and attacked a now grown Chan Liuchow and his group of supernatural investigators known as the Legion of Night.

Around that same time, Fin Fang Foom made his presence felt in IRON MAN. Around issue #260, The Mandarin started amassing his power once again, which included an alliance with none other than the dragon himself. As explained in #264, Foom actually belonged to an alien race called the Kakaranathara that came to Earth centuries ago. 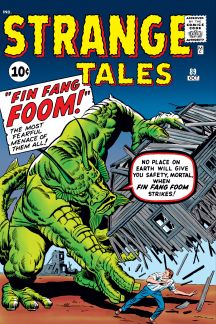 Landing in China, Fin’s companions used their shape-changing abilities to integrate into society while he went into stasis watching the ship. Later, the man who became The Mandarin snuck aboard the vessel and stole the infamous 10 rings. Back in the then-present, Mandarin woke Fin Fang Foom to help him take over a chunk of China. The alien dragon had plans of his own to summon his fellows and conquer all of Earth, but Iron Man, War Machine, and ultimately Mandarin stepped in to stop them.

Foom’s so popular that his visage pops up even when he himself does not. Don’t be fooled by the supposed appearance in the pages of THOR #379 by the legendary Walt Simonson. As that story progressed the sage-like Fin Fang Foom turned out to be none other than Jormungand, the world serpent. Nightmare used a similar idea in HULK #39 when he took a Mindless One and made it look like the large dragon.

Over the years, creators have used Fin Fang Foom for comedic purposes—like in the first few issues of NEXTWAVE—as a serious menace as in IRON MAN or as an unexpected hero in the pages of MONSTERS UNLEASHED!

Up next, Monstrom struggles to get help fixing his ship and instead runs into a group of torch-bearing humans!