A being of pure water nearly floods a polish village until the local layabout saves the day!

Heroes come in all shapes and sizes from the nerdy kid in your science class to the town layabout! No, TALES OF SUSPENSE #12 doesn’t feature a proto-Spider-Man, but it does turn loafer Hans Grubnik into the hero of his Polish village thanks to a story by Stan Lee and Jack Kirby.

The tale kicked off by introducing readers to a gaseous alien creature who posed no real threat to anyone while floating through space. However, after landing on Earth and melding with the planet’s copious amounts of water it turned into a giant, rampaging monster dubbed “Gor-Kill” by the townspeople. 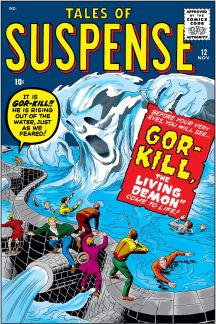 The assemblage tried their best to defeat the monster, but couldn’t find their quarry after it ran towards the dam. With tensions at their highest, ire turned towards shiftless Hans and his fellows banished him. While walking towards his next laze location, Hans made an incredible discovery: the creature wasn’t covered in water as the people thought, but instead made of it!

Realizing that, if it reached the ocean, Gor-Kill would become unstoppable, Hans ran back to town, stole a passel of dynamite and blew up a mountain pass as the water beast slogged through. Dispersed by the explosion, the smaller sections of water seeped into the soil, seemingly removing the threat forever.

Unfortunately for Hans, no one actually saw him accomplish this heroic feat, so when they found him they locked him up for stealing the dynamite! They didn’t even know that Gor-Kil had been destroyed and assumed it had simply moved on to its next village. Even worse, after serving the “few months” jail sentence, Grubnik would be banished once again! Maybe Hans is more like Spider-Man than we thought!